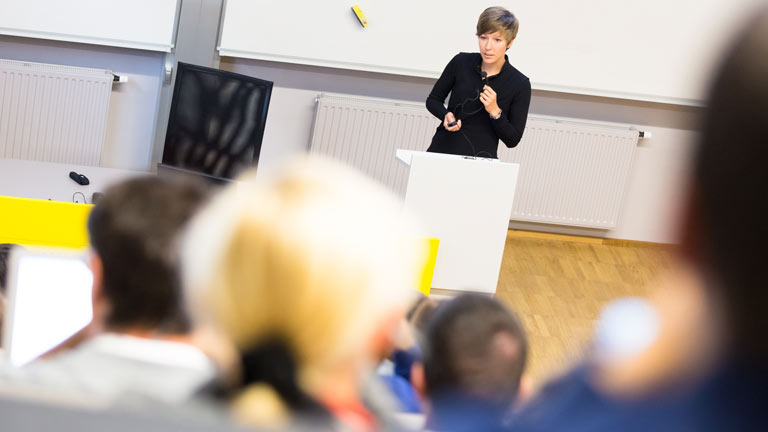 Women to the fore

Why do men continue to beat us in terms of public appearances involving communication challenges, whether public speaking or writing an article?

I recently received a call from one of the speaker bureaus I am listed with to tell me that they would be submitting my candidacy, together with those of two other people, to give a talk to a a large group of professionals who would be meeting for a convention in a city on the eastern coast of Spain.

My contact told me I stood a good chance of being chosen, because the group preferred a woman speaker with a strong command of English, a combination in relatively short supply. That last remark stayed with me.

From the moment I received the call, my curiosity was piqued.

I began to investigate informally, taking a closer look not just at the speaker bureaus in Spain, but also at the calls for multiple events announced on social media.

Although I cannot offer specific figures, I found that the number of women speakers is significantly lower than the number of men.

In some forums, you would be hard-pressed to find not only woman speakers, but even women panellists.

For instance, a week ago, I attended an event about technology and human resources. The panel consisted of six men and zero women. And the context for that event was human resources, a field in which many women hold senior positions.

Had it been about technology in another field, the likelihood of finding a woman panellist would have been even lower.

My curiosity grew and I turned my attention to another area. In recent months, I have been looking at articles by external contributors to newspapers. I have noticed that, for example, one leading daily, in which I have had the privilege of being published several times, features very interesting opinion pieces every Sunday.

However, it has not run a piece authored by a woman for months.

I know the newspaper receives numerous submissions, but based on the ratio of published articles by women, I would be willing to bet that it receives far fewer submissions from women than men. And lest anyone be tempted to blame this state of affairs on the "unseen hand" of a man tipping the scales against women, rest assured that is not the case: the person in charge of the section is a woman.

We know that the percentage of women STEM students is unfortunately very low, resulting in a clear gender gap in those fields. However, women have traditionally outnumbered men in language, humanities and social science classrooms.

Likewise, several studies have shown that women have stronger language skills than men. So, if women are theoretically better "prepared" to tackle challenges that test our communication skills, both oral and written, why do men continue to beat us in terms of public appearances involving communication challenges, whether public speaking or writing an article?

I do not have any proven or scientific answer. I can only draw on intuition to venture a possible reason.

It seems to me that the problem is not about speaking or writing. The problem stems from the need to "do it in public." After so many years of being taught not to stand out, women have culturally internalised the notion that that was our place, that we should provide support, of course, but not in a way that makes us the centre of attention.

It is high time we take advantage of public channels to make our voices heard on the vast array of topics on which we are experts.

I am thrilled by the creation, in recent years, of numerous women’s associations, which foster considerable support amongst us. We have to join them – it is a good start – but we also have to be outside them and stand side by side with our male counterparts.

It is my wish that, in a few years, I will no longer have to hear that being a woman gives me an edge in the selection process for a panel due to the relative lack of competition. I want to be surrounded by women competitors – the more, the better – and to see more and more women’s opinions featured in the media.

We have the skills and we are prepared. So, what are we waiting for?