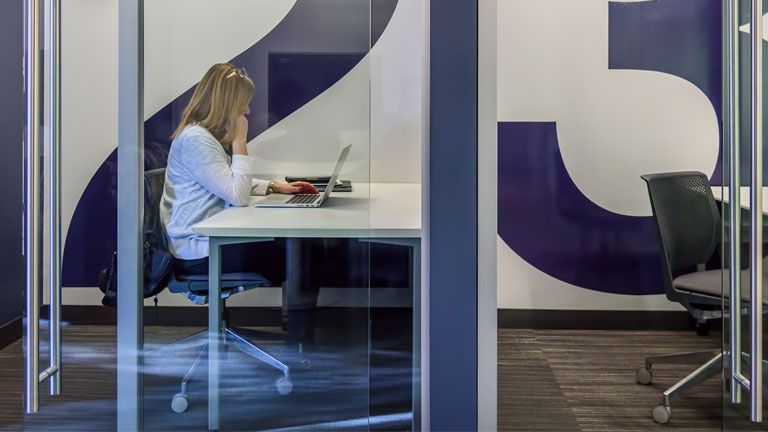 Less swagger, more systems: how to break the glass ceiling

Article based on research by Laura Guillén

Glass ceilings are real. Countless studies have shown that women are consistently underrepresented in higher levels of business. Less clear is what we should do about it.

Ideas range from awareness campaigns to legislation, but one pervading suggestion is that women should simply act with greater self-confidence, find their swagger, and break through the glass ceilings themselves.

According to Laura Guillén, Associate Professor at the Esade Department of People Management and Organisation, such messages are "detrimental to women."

Writing for Harvard Business Review about her research in this area, she quotes female leaders such as Facebook COO Sheryl Sandberg, who in 2013 urged women to "rewrite the rules," "visualise success" and "take the stage."

Underqualified and underprepared men don’t think twice about leaning in

This attitude, says Guillén, frames the barriers that women face as something that women can train themselves to overcome by being more assertive and aggressive, and by learning the rules of a male-dominated working world.

Underlying this is the widely held assumption that women are less confident than men. As authors Katty Kay and Claire Shipman wrote in their 2014 book The confidence code: the science and art of self-assurance – what women should know: "Underqualified and underprepared men don’t think twice about leaning in. Overqualified and overprepared, too many women still hold back. And the confidence gap is an additional lens through which to consider why it is women don’t lean in."

The evidence, however, is too thin to sustain the argument. After considering studies that show no consistent gender differences in self-reported self-confidence and similar self-ratings in leadership qualities, Guillén re-examined the relationship between confidence and organisational influence.

Together with Margarita Mayo at IE Business School, and Natalia Karelaia at INSEAD, Guillén focused not on how confident women feel, but on the extent to which others perceive them as self-confident.

By diving into data from a large international tech company, where most employees were male, the researchers compared how perceived self-confidence correlates with increased influence in the organisation.

Their findings show the following:

No matter how self-confident women are, the results are not the same as for similarly self-confident men. Guillén writes: "The 'top performance plus confidence equals power and influence' formula is gendered. Successful women cannot 'lean in' on a structure that cannot support their weight without their opportunities (and the myth) collapsing around them."

Change the game, not the players

Since being caring, nurturing, warm and selfless are prescriptive attributes for women, one (arguably simplistic) implication of our results is to offer differing advice to women and men on how to progress their careers.

For men, the take-away would be: "Do not worry about being prosocial and doing good for others, if you perform you will get ahead anyway."

In contrast, for women the message would be: "If you want to be influential and thus be able to progress in the organisation, make sure you perform and also invest time in helping others and being a good citizen."

Another and fairer interpretation of the implications of our results is that organisations that care about gender equality should make sure that dealing with "gender issues" is not put exclusively on women’s shoulders.

If top performers radiate self-confidence regardless of gender, yet the outcomes of this confidence are not equal for men and women, then companies must take responsibility for changing their systems and practices to get the best from their entire workforce.

"Only when organisations make active efforts to uncover gender biases and the processes that perpetuate them will they become closer to the kinds of workplaces we believe in – where our talents and skills are rewarded fairly, regardless of gender," Guillén writes.

There are three key lines of action, says Guillén, that organisations should consider:

HR departments should eliminate guesswork and create detailed lists of what is required. That could include benchmarks such as warmth and caring for other team members – these are valuable qualities, especially in sectors where women are underrepresented – but they should be required benchmarks for men and women equally in terms of recruitment and promotion.

Close monitoring can help minimise or eliminate implicit gender biases in male-dominated companies. Research by Guillén and her colleagues shows that self-confident women might do worse in performance appraisals than similarly confident men unless they also demonstrate warmth and nurturing characteristics.

Close attention to this by HR can ensure that women who do not meet gender stereotypes are not penalised in selection or promotion decisions.

Stereotypes can be broken by considering role models that do not fit the mould. Move away from ideas such as the typical high-performance software engineer being a male with poor social skills, and look for a broader range of successful examples who can inspire a broader range of talents.

To be credible in male-dominated professions, women may attempt to match stereotypical expectations associated with male typed jobs, and so downplay their authenticity.

Although agency can eventually help women gain influence in their organisations, suppressing typically female prosocial behaviours can trigger a social backlash. Thus, organisations that want to benefit from diverse talent should convey the message that individual authenticity is welcomed, and that there are multiple paths to success.