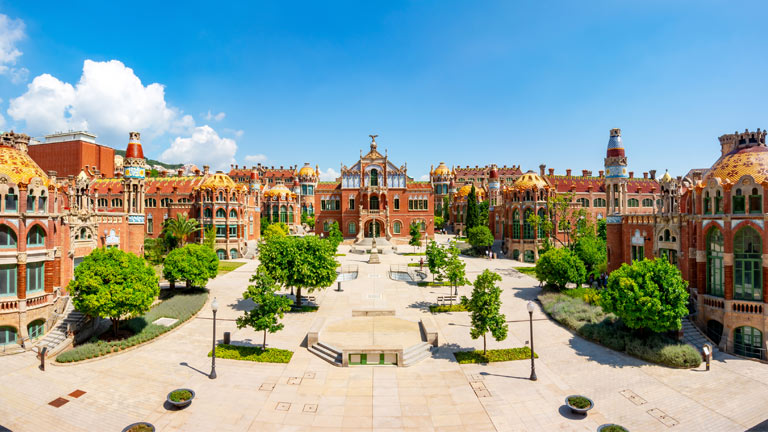 Article published by the Center for Corporate Governance

The Hospital de la Santa Creu i Sant Pau is a unique complex of Gothic and Modernist buildings in Barcelona. Tourists who leave the traditional sightseeing routes and are lucky enough to enter the complex are surprised to see the beauty of its architecture and the organisation of the hospital into pavilions, some of which still bear the name of previous decades.

The old buildings have been joined by new centres with the latest technology. The hospital is now a public medical centre at the forefront of healthcare and research, and in which thousands of patients are treated every year.

What tourists probably do not know is that the Hospital de la Santa Creu i Sant Pau was founded in 1401, from a merger of the six hospitals that existed at the time in Barcelona, and the hospital is governed by representatives of the city and the Catholic Church.

After facing six centuries of epidemics and diseases, many of which have fortunately been eradicated, and after introducing the most advanced therapies to treat the ailments and health challenges of each era, the hospital remains faithful to its original mission: to cure the sick and carry out research. This commitment to the objectives of the founders is the responsibility of the Fundació de Gestió Sanitària del Hospital de la Santa Creu i Sant Pau, which manages the hospital, and its governing body, the board of trustees, made up of six representatives from the public administration and the Catholic Church, a composition similar to that introduced when the hospital was founded.

As one of the oldest foundations in Spain, the hospital is a good example of the role that foundations continue to play in our society and economy. Their legal form – different from companies – is adapted precisely to the role played by the foundations and their raison d'être.

Foundations are defined by the Spanish Association of Foundations as "non-profit organisations that pursue general interest purposes and support generic groups of people." The absence of a profit motive implies the impossibility of distributing profits, but does not prevent them from having surpluses. In fact, foundations should be economically sustainable and generate profits for the fulfilment of their mission or to increase their patrimony. Their mission is a central element and its fulfilment and adaptation to changing realities is why centuries-old foundations have survived. This is made possible by their governing bodies, and more specifically, their boards of trustees.

There are some 8,900 Spanish foundations employing a total of 256,867 people and accounting for 0.8% of the gross domestic product. The territories with the highest density of foundations are Madrid, Cantabria, Navarre, Catalonia, and Aragon.

According to a report by the Spanish Association of Foundations, 75% of foundations had an annual income of less than €1.3m in 2012, and the sector includes many small foundations that often struggle to sustain themselves and fulfil their foundational aims.

However, beyond the statistics on their impact on the economy and jobs, the foundations are active in key sectors for the sustainable and fair development of society – and focus on areas of special need and social sensitivity: health; culture; the care sector; education; the environment; and research.

Because of the aims they pursue, their wish to have an impact on society, their operation as non-profit organisations, the donations they receive, and the altruistic work of volunteers, foundations should pay special attention to the rules of good governance and make a commitment to ethical behaviour and transparency. By behaving in an exemplary manner, they generate confidence among the public.

In short, the good governance of foundations benefits each individually, and also the credibility of the sector. It is worth remembering the reputational damage that bad practices caused the entire foundation sector in the past.

The good governance of foundations benefits each individually, and also the credibility of the sector

This is why there is growing interest by foundations in adopting good governance standards, despite the fact that 63% still lack an explicit and published code. The recommendations of the bodies that represent the foundation sector, and the evolution of corporate governance in companies, have led to the drafting of a series of procedures and recommendations that guarantee transparency and responsible practices.

The sector can draw inspiration to establish its own good governance codes from a document published by the Spanish Association of Foundations and drawn up by PwC [1], the Uría Menéndez Compliance Guide [2], Catalan Foundation Coordinator [3], as well as the Good Governance Codes of various business foundations.

All of these codes focus on aspects related to the board of trustees: its functions; the processes for electing trustees; the duties of the board; its functioning; and the appointment of positions. These boards are responsible for ensuring that the foundations adopt practices as important as accountability, transparency, communication with all stakeholders, responsible management of resources, equal opportunities, non-discrimination, and the protection of the environment.

The challenges facing society today, some of which are described in the Sustainable Development Goals, include the need to build a fairer and more sustainable world and to protect sectors such as education, health, or culture. Foundations are becoming increasingly important in meeting these challenges. Everything that is done to favour their creation, growth, and impact will benefit everyone. The adoption of good governance practices will help ensure we can celebrate the anniversaries of many more long-lived foundations.