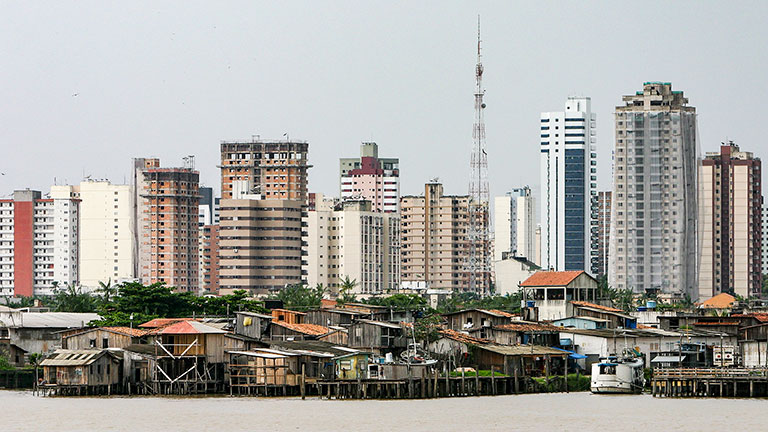 Income inequality has been seen in recent years as a major source of concern directly affecting the sense of well-being among large segments of the world’s population as well as, indirectly, social and political stability. The measures generally used to track income inequality (such as the Gini coefficient summarizing income distribution across population segments), however, seem to underestimate the factual and perceptual dynamics of inequality and even more so the self-perpetuating inequality of wealth. Coming out of a pandemic that has widened education inequalities and favored returns to capital over labor compensation, there is further reason to worry about the implications.

The overall income inequality picture bears different readings: there has been a general—though far from homogeneous—reduction of the gap in country per capita incomes; and in-country inequality has improved in some places and worsened in others—remaining a source of social unsatisfaction virtually everywhere. This unsatisfaction has already caused political surprises and disruptive demonstrations in many places; given the easy with which people can be mobilized through social media, growing inequality (or even just the perception thereof) can have implications for many markets, business stakeholders and regulations.

Convergence (reducing the gap with high-income countries has generally taken place but there are significant exceptions—including two of the BRICS. Sustained high growth rates in China have produced many headlines and being the most populous country in the world the size of its GDP has grown to become the largest in the world when measured in PPP terms (and, more meaningfully, the second largest at markets prices). 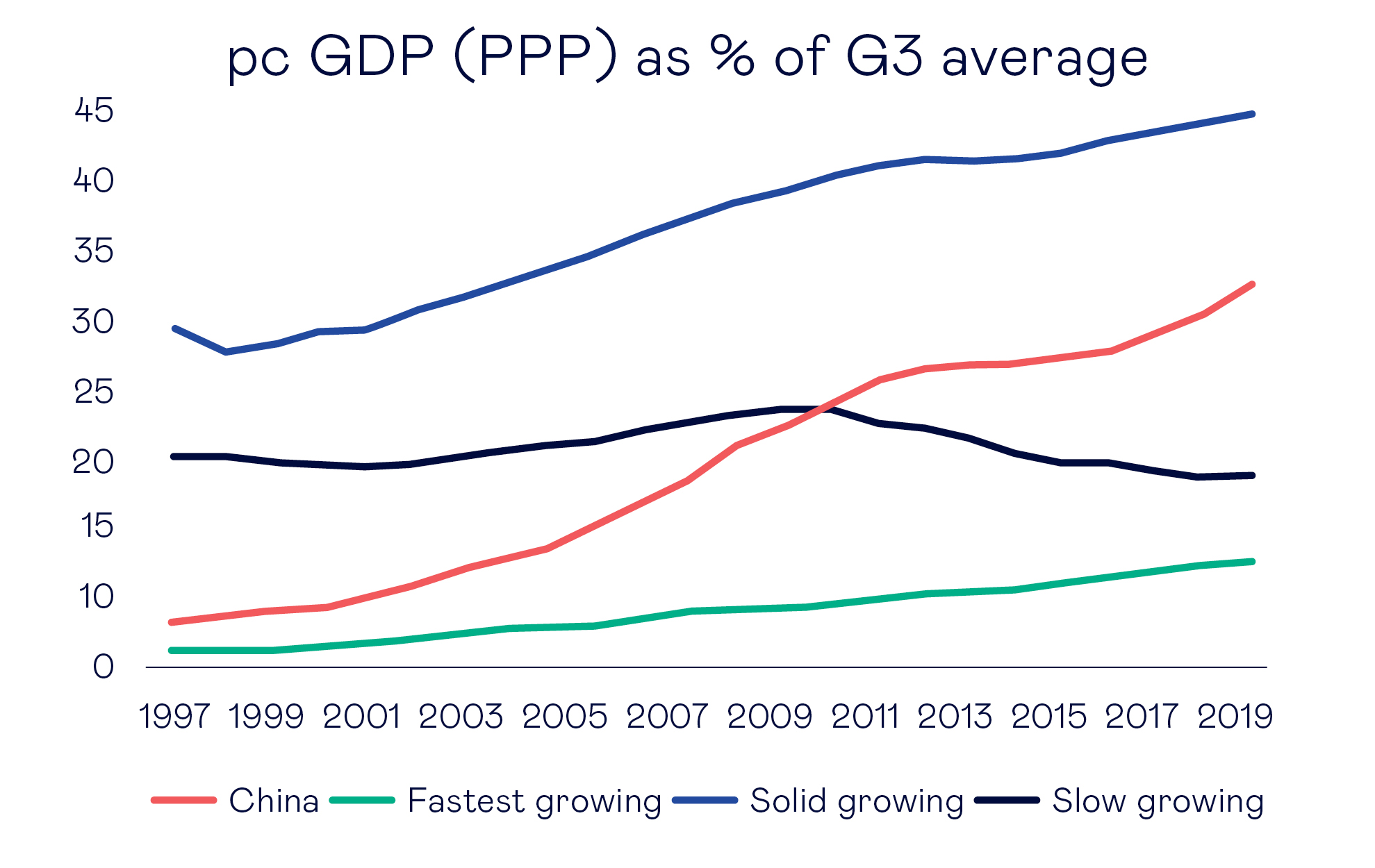 But even in PPP terms China’s per capita income is still well below the average of three high-income countries (Germany, Japan and USA = G3) that provide a useful convergence reference point. Its performance over the last 20 years (up to one-third from one-twelfth to one-third of the G3 average) is remarkable but there is plenty of room left for catching up.

Other fast-growing countries (among the 48 countries with the largest economies and populations that we analyzed) mostly consist of originally low-income ones. They include India and Vietnam (the latter increasing from under 8% to over 20%) and as a group they cut the gap with the G3 average in half.

Countries that had solid growth consist mostly of middle-income countries that significantly reduced their gap with the G3 average and include Korea and Poland that almost halved it.

Countries that did not grow enough to significantly reduce the gap with the G3 average include major countries like Brazil and South Africa that saw the gap even grow larger and Nigeria and Iran that had oil-related income rollercoasters without a clear upward trend.

The most widely used measure of within- country inequality is the Gini coefficient summarizing the income distribution. The recent trend appears to be generally positive: the global median has declined slightly and most major countries—with the exception of the USA—have seen inequality decline by this measure (although it remains at high levels in some countries—such as South Africa and in Latin America) 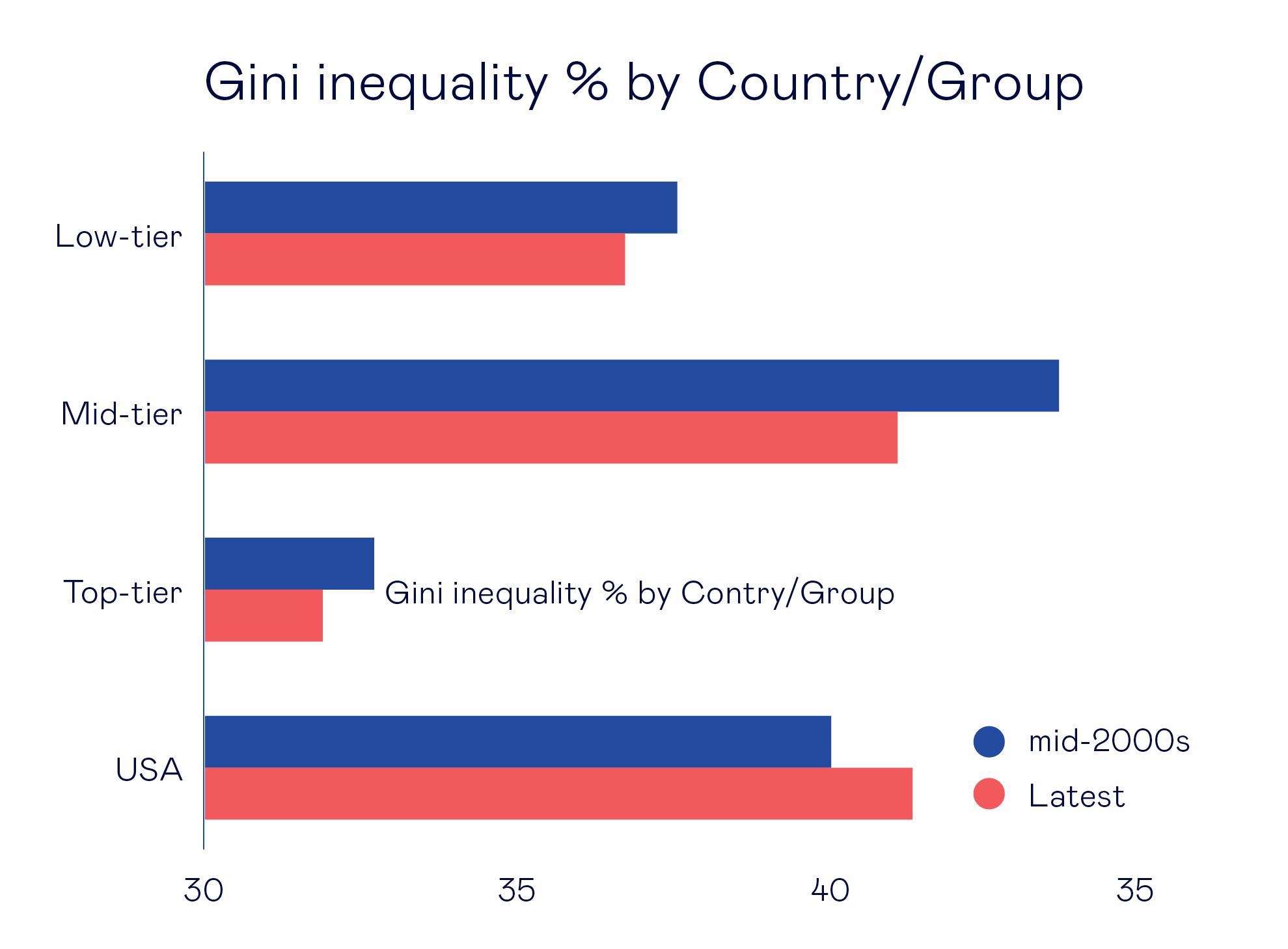 But data on the evolution of within country income inequality based on Gini coefficients (which are calculated from household surveys) are clearly flawed. The reductions in inequality in many countries seems to be at odd with perceptions and other data suggest that there has been a continuing worsening of inequality. Poor coverage of the wealthy in household surveys seems to be the main reason for the disparities: for example, according to Brazilian survey data, inequality in the country decreased between 2001 and 2015 but income tax data show that inequality remained stubbornly high over this period.

The global picture of income inequality is a complex one. The rapid growth of per capita incomes in China and several former low-income and middle-income countries has meant that the income of their middle classes has grown much faster than that of the middle classes in high-income countries—producing a statistical improvement in global income inequality consistent with the finding on convergence. The World Inequality report (2018) documents this by showing that the top decile of households in the world saw their income increased in real terms by 70% over 35 years—compared to 94% for the bottom five deciles and only 43% for the middle four deciles.

The experience of most households around the world seems to have resulted in a perception of greater inequality, especially by the middle class in high-income countries

The experience of most households around the world however seems to have resulted in a perception of greater inequality (especially by the middle class in high-income countries). Generally, the increased publicity around the standards of living of the 1% of the global population (whose incomes over the last 35 years grew by 133%) seems to have highlighted the growing income gap between middle classes and upper-income classes and added to the perception of inequality.

The inequality data from surveys is most widely quoted outside academia and the fact the picture it paints does not seem alarming may have resulted in underestimating the importance of the problems and the strength of feelings around it. Tax records paint a much more worrisome picture—and portend a further expansion of within-country income gaps. The implications in terms of widespread dissatisfaction should not be underestimated--given the potential for triggering social activism which, in turn, could result in political and regulatory changes with pervasive effects—including for business.

To ensure that inequality as a cause for social dissatisfaction is not underestimated it is increasingly clear that the information obtained from objective, retrospective sources must be complemented with forward-looking and subjective information. Opportunity is a vital forward-looking indicator that combines reality and perception—without a sense of opportunity it is hard to mobilize a society’s entrepreneurial potential. While opportunity is not measurable directly, social mobility dynamics provide insights into it and the WEF’s recent index on that topic offers some useful insights.

The assessment of happiness (relative at one time and across time) has rightly been receiving increased attention—in part most likely because of the social unrest surprises that have resulted from relying on purely objective, economic measures to track well-being. A simple summary measure put out by the World Happiness report provides a useful entry point into subjective well-being (which appear to be significantly affected by perceptions of inequality). 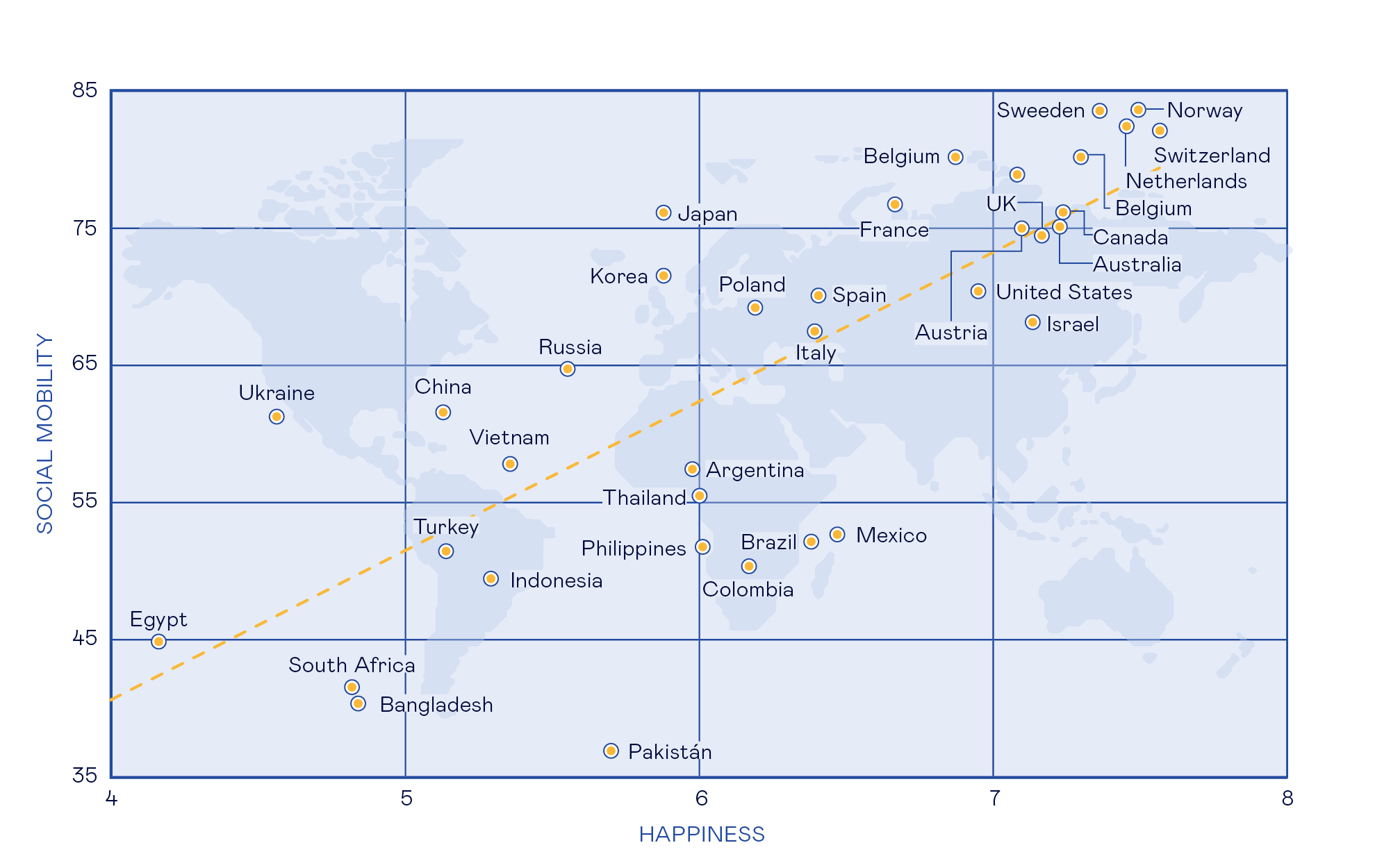 Comparing these two synthetic measures confirms the importance of paying much more attention to the issues of opportunity and equality that are embodied into social mobility. It might not be surprising that the two measures are strongly correlated (when applied to our list of 48 major countries) but it is surprising—and telling—that the Happiness measure is weakly correlated with the Gini coefficient of inequality.

The subjective measure of Happiness based on a standard survey questionnaire is undoubtedly influenced by cultural differences but the overall strong relationship between these two indicators confirms the importance of keeping track of perceptions of well-being and of ensuring that factors affecting social mobility receive the attention they deserve in the pursuit of stability, prosperity and entrepreneurship. Economic realities and perceptions of inequality an opportunity have complex—not always obvious—linkages and difficult to predict pathways and consequences.

If inequality—in fact and perception—keeps growing it will raise further the level of uncertainty surrounding politics and regulations and heightens the risk of sudden shifts. The evolution of inequality and its root causes could reshape market rules and it is wise for businesses of all kinds to treat it as a serious concern.