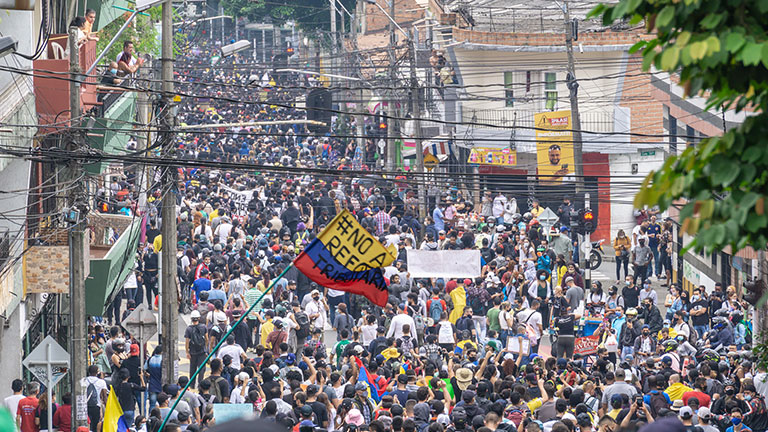 Lessons to be learnt from Colombia

We tend to have many preconceived ideas about Latin America. Governments are often suspected of being heavy-handed and citizens in demonstrations seem to be victims of some great injustice. During my long period at the Ibero-American Development Bank, I saw how some western governments and international organizations tended to heighten such bias. Can you imagine them criticizing the United States and demanding explanations about police violence and the death penalty? These thoughts come to mind about Colombia, where a proposed tax reform triggered violent disturbances with many deaths.

The simplistic interpretation of reality and the implicit sense of superiority that disparages a country whose track record could teach us a thing or two, are striking. The institutional quality of every country has room for improvement, to a greater or lesser extent, but I do not agree that some countries are entitled to lecture others. If institutional quality is rated according to income per capita, for example, Colombia is no worse than Spain or Chile, whilst Costa Rica or Uruguay are comparatively better. Nor is it fair for the yardstick to depend on a country’s relative power, business appeal or ideological clichés. The different criteria applied to different countries never fail to surprise: calls for dialogue in Venezuela and Cuba contrast with the focus on police violence in Colombia and Chile.

Colombia has had to deal with huge domestic and foreign problems in recent years and has done so remarkably well. It has been the country in this region hardest hit by terrorism financed by the drug trade with safe havens in neighbouring countries. The peace process tore the country apart and the demobilization of thousands of former fighters is not something that can be remedied without outbreaks of violence. Colombia also has countless internally displaced persons in addition to millions of Venezuelans in an exodus on a par with that of Syria – but with virtually no foreign aid. Before the pandemic struck, Colombia nevertheless had its best ever social indicators and is a fine example of policies spanning such a broad spectrum as senior citizens, job creation, enterprise, gender, youth and indigenous rights.

The impact of the pandemic on this panorama has been devastating and the Government has attempted to increase the country’s very low direct taxes to fund certain social needs. It must be said that Colombia, unlike many other countries, has never defaulted since the Great Depression. The tax reform was technically sound and clearly distributive and guaranteed a basic income for the lowest-income groups. However, it placed an additional burden on the lower middle class and this triggered the disturbances. Protests by the lower middle class were used to champion the interests of the upper and upper-middle classes, and with presidential elections on the horizon next year, the outcome was obvious.

I wonder what would happen in Spain without a European Central Bank buying up hundreds of billions of euros in securities and a European Union providing massive subsidies and loans. Colombia and many other countries are left to their own devices, with markets ready to pounce and an undercurrent of high social unrest. It’s not fair to disparage them.

If there is one thing that characterises LatAm countries, it is not the strength but the weakness of their executive power. Reforms involve long and winding legislative roads, so the best tax reform is said to be the one passed by Congress. Political parties are known not for their discipline and unified programmes, but by their fragmented, individualistic membership. The streets are not merely a peaceful venue for demonstrations but also a melting pot for sinister interests and anti-system groups seeking to exploit violence. Against this backdrop, mistakes and abuses by the police are the main risk that could cause conflict to escalate.

As in Chile, all this is happening in the midst of a serious crisis in a political system threatening to become increasingly disconnected from society. The streets can be a vehicle for citizens’ rights but not an institution for resolving political conflicts. Tolerating this mindset would make the institutions more vulnerable and make the reforms needed to regain their legitimacy even more difficult.

During the past financial crisis, the Inter-American Development Bank shared with Europe the LatAm experience of managing previous crises (then-President Luis Alberto Moreno rightly said that the region knew a great deal about this subject). The knowledge shared, however, had a lukewarm reception, like a graduate’s reaction to a student trying to teach him something he should already know. The truth is that if the lessons had been taken seriously, mistakes and problems would have been avoided. Latin America also knows a great deal about social conflicts and unsuccessful reforms and, judging by what lies ahead, we would be well advised to watch and learn from them.