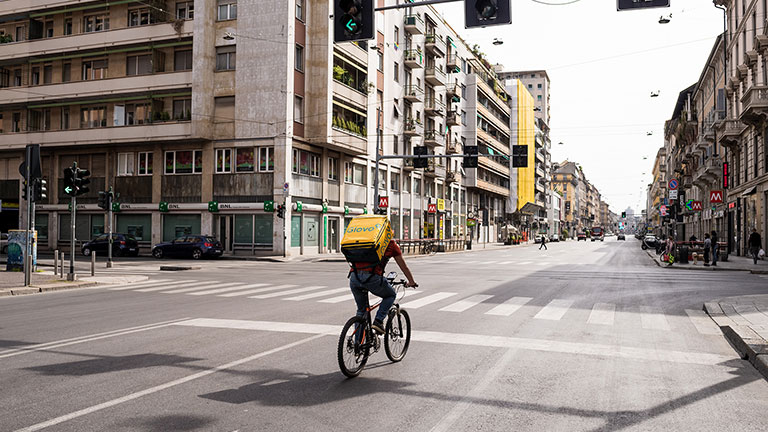 Freedom, precarity, and conflicts: jobs in the digital age

Article based on research by Alessandro Niccolò Tirapani

Having food delivered at home is not necessarily something new. From pizza to hamburgers, placing an order by phone has been common for decades. However, in the last few years the advent of fast internet and the introduction of mobile apps has led many companies to adopt what is known as platform business models. In a nutshell, platform companies like Deliveroo, Netflix or Airbnb provide the technological infrastructure to match demand and supply. Hence, they specialise in creating ‘markets’ as opposed to directly providing goods or services.

This model has been applied to a huge variety of industries (i.e., software, housing, audio-visual, etc.). Nonetheless the food and groceries segment has posed specific challenges. Above all, the real test for platforms is rooted in the need for them to manage not only the connections between customers and vendors, but also the logistics. Indeed, transport is most often the bottleneck that leads platforms to accumulate delays and squeeze margins. It is also exposed to risks of lowering – or mismanaging – employment and social security standards, making it a prime area of investigation for those interested in social issues in management.

How has work changed with the advent of platforms?

The new business model has changed the employment arrangements of those performing the deliveries (a professional figure now called ‘riders’). Whereas before the riders were hired by restaurants and shops, with the dawn of platforms these workers have been classified as self-employed freelancers: they are supposed to just connect to the app and perform deliveries, with neither allegiance nor legal commitments to vendors.

In the early days of this shift, practitioners and academics appreciated the positive sides of this innovation: riders were deemed free to choose where and when to work with minor bureaucratic procedures; they were certain of being paid; and they were not vetted beforehand – an issue particularly relevant for minorities that might face discrimination during the hiring process.

Yet, mounting discontent has plagued the much-idealised image surrounding the platform economy. First, both unions and regulators have contested the idea that riders are self-employed, since the app regulates in several ways how jobs are allocated. This has escalated into national court sentences (first in the UK and later in almost all Western countries) and, eventually, new legislations – from Spain to California to the European Commission. Additionally, riders are price takers in this business, unable to make their price demands: this effectively bars them from a basic tenet of freelancing. Finally, observers and riders have highlighted that the demands of platforms in terms of efficiency (namely minimal pay rates, fast-paced job allocations, and the extensive use of quantification and ratings) undermine the sense of freedom or empowerment that this job could offer.

Is conflict simmering or boiling?

Esade postdoctoral researcher Alessandro Niccolò Tirapani and Professor Hugh Willmott from Bayes Business School (City, University of London) examined in their research what happens when the tensions between the positive and negative sides of the platform economy, chiefly in the food sector, are not resolved. They show that riders normally do not question the shortcomings of their employment situation: either because they have accepted them or because they have no immediate alternatives. However, there are instances – like traffic accidents or unilateral changes to the algorithm – when riders transform their latent grievances into demands for a new employment arrangement. This is when strikes are called and demands for a change in the business model get louder.

The results of this research suggest that conflict simmers in the background, sometimes boils, but rarely radicalises, so it never achieves substantially better working conditions or salaries. The authors argue that there are two reasons for this. Firstly, the proposed solutions to demands are predominantly reformist (i.e., extended insurances or slight adaptations of remuneration), and thus they do not address the core sources of conflict in these labour relations. Secondly, mainstream riders’ associations and social movements predominantly think in economic terms, and within such boundaries, radical alternatives to the current platform economy are not to be found. Simultaneously, those riders and movements who do in fact table radical, non-economic oriented solutions are eventually shunned and ostracised.

The future of conflict in the digital age

Overall, their study shows that the platform economy applied to the delivery industry entails deep-seated problems that can trigger conflicts. Currently, the bulk of solutions has been found in proposing minor or technical accommodations, with the goal of reforming those aspects of the business model that have the worst social impact. But this is often not enough: radical demands stem from structural problems, and as long as these remain unaddressed, the industry will be torn over how to balance profits and secure a social licence to operate (enshrined in court rulings and new legislations).

Gesturing towards this, the authors suggest taking radical riders and social movements more seriously, as the solution may be found in ways of organising not centred on economic dogmas. Such conclusions can be extended to much of the digital economy that uses the platform business model: such a framework has led to significant imbalances in power and resources, increasingly conjuring conflicts.