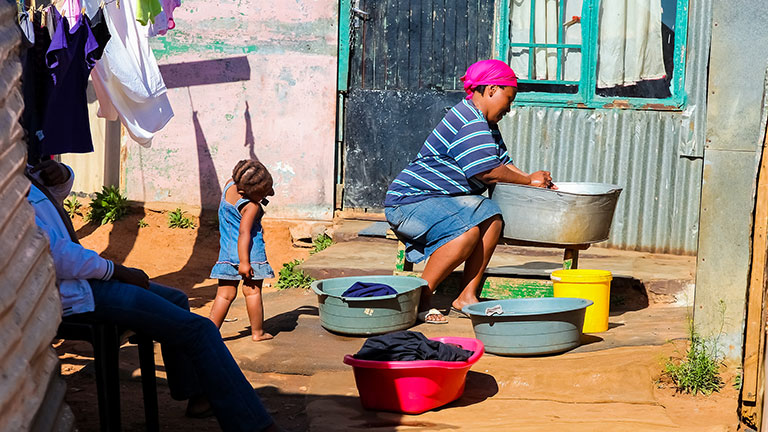 Looking for the power for renewal

The mood in Europe is gloomy. We live in one of the wealthiest and safest continents in the world, and yet we complain about lockdowns, a lack of safety, and the quality of our social lives. Our children are among the happiest in the world, but we believe that teachers and youth workers are not doing their jobs properly. We grumble about rising healthcare costs, the raised pension age, the level of unemployment, and trains that arrive late. We seem to lack everything, and we pay more attention to scarcity than to the wealth in our lives – and the opportunity we have to be vaccinated against the coronavirus.

The discussion about scarcity reminds me of when I was in South Africa in Soweto, a township of Johannesburg. Approximately four million people live in Soweto in around 90 neighbourhoods. Unemployment is 60% and poverty are rife. Most people live in slum dwellings made from corrugated iron and cheap building materials. AIDS is still a major problem.

For many people, Soweto evokes images of violence, rape, murder, rioting, and danger. And that is what it was like ten years ago. Soweto was a ‘no-go area’ abandoned by the official authorities in Johannesburg. The police would not go there. There was scarcely any schooling. Rubbish was not collected and piled up. The situation seemed hopeless.

Artist Mandla Mentoor took the decision that he did not want to live in a neighbourhood where art was impossible. "I was facing a choice: who and what did I want to be? I wanted to be Mandla, a proud black artist who contributes to life through his art. But what could I do in an environment where there is nothing? And yet I knew that if I did nothing myself, there was a good chance I would become a murderer or be murdered – instead of being an artist."

The starting point for renewal was gathering together the children whose parents had died of AIDS. The children began planting flowers on the edge of a hill that had become a towering rubbish dump. Mandla explained: "Every situation has possibilities and hope for improvement. Every situation also has energy and a positive force for renewal. The trick is to discover them. You have to understand that Soweto is a black township. The black community respects nature, ancestors, and children. From that positive force it was easy to gather children together to plant flowers for their deceased parents."

Every situation has possibilities and hope for improvement

When Mandla asked the children whether they wanted to continue to live in this dead-end situation, their answer was: "No!" But what could they do? There was a lack of work, schooling, healthcare, and safety. But then they turned their thinking around and gave the hopeless situation new meaning: there was an abundance of manpower, plenty of raw materials in the form of waste, and plenty of desire to make a difference.

Under Mandla’s guidance, children started to regard waste as a raw material. Waste was collected and sorted. Plastic was used to make hats and bathmats. Old paper was turned into new paper that schools could use. Unusable paper was used for papier-mâché which served as a material for art. Old barrels were turned into musical drums. This stimulated other people to make other musical instruments from the mountain of waste. Art and music thus came into existence, the mountain of waste was eliminated and people in the neighbourhood found a new identity.

When I asked what was so nice about making music, Phaswane, a 16-year-old black drummer, answered: "It’s nicer to make music than to kill people. Where I grew up, there was a lot of murder. I faced the choice of having to commit murder or being murdered myself. I have left those times behind. Making music is much nicer." The same Phaswane now travels the world making music with his group and a youth dance group. The money he earns goes back to the community.

More than 20 groups are now active in the neighbourhood. As well as a music group and an art group, there are groups for waste processing, environmental design, education, clothing repair, catering, dance, media, and tourism. The groups organise themselves. They meet regularly to ask each other questions, give advice, support each other, and develop new initiatives.

There is no longer any rubbish in the neighbourhood. The rubbish dump has gone back to being a hill with a park-like landscape where people from adjacent neighbourhoods can meet each other. The old water tower on the hill, previously a hiding place for youth gangs, is now a symbol of renewal. The discarded car tyres, previously used for necklacing murders, now serve as building material for a community centre. Murder, rape, and robbery have become rare.

Even in the most hopeless of situations there is space for renewal by looking at what is there, where there is positive energy, and asking who wants to participate

From the basis of identity, giving meaning and self-organisation, a new community has arisen which shapes its own future. The transformation goes even further. The music and dance groups are winning international fame. Their success has made them an example and a support for groups of young children who are learning to make music and dance. A new group has been formed whose members want to tell the story about the quality of life in their neighbourhood to people in other neighbourhoods in Soweto.

Duduzile, a 15-year-old girl, says: "We are going to tell people our story, we are going to show our enthusiasm. We are going to invite them to come and have a look at our place. We will ask them whether they want to share their experiences because we can only make a difference if we work together."

If you know who you are, and who you want to be, then you can take unusual initiatives. Mandla Mentoor taught me that even in the most hopeless of situations there is space for renewal by looking at what is there, where there is positive energy, and asking who wants to participate. By going and having a look at unusual places as a leader, professional, or advisor, you learn to look at your own environment differently, and you start to see new possibilities.

Of course, this also raises questions: do you dare set foot in a place that is strange and dangerous? Yet it is precisely in such places that you pick up new ideas. Roaming through an unknown area helps you look at yourself and your environment differently. When you examine existing situations with an appreciative look, you see the power and beauty that is present. Instead of scarcity, you see an abundance of possibilities.

Entering a different culture with an open mind helps you look differently. Francis Picabia’s statement is all too true: "Our heads are round, so our thoughts can change direction." That can come in handy when we are exploring the surroundings and want to understand what is happening.

Blue Monday? Deconstructing the myth, yet… this time around it might feel bluer than ever

Stress and depression during the pandemic: Why gender inequalities, labour market conditions, and a reliable transfer system matter