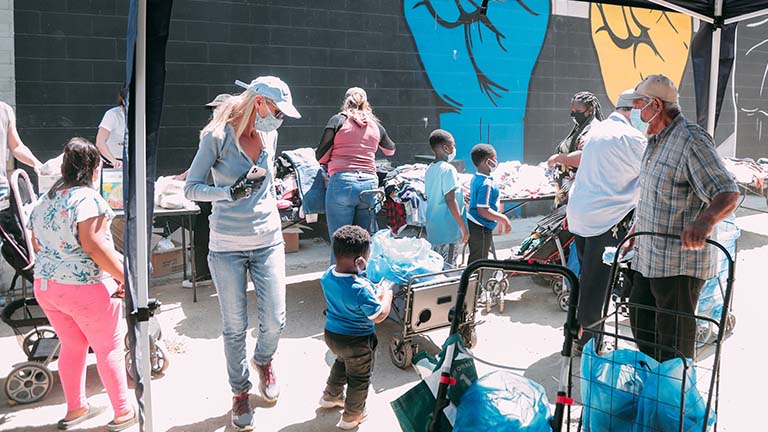 Article based on research by Daniel Arenas

Social enterprises typically work for the greater good, so it seems obvious that they should cooperate. However, according to Daniel Arenas from Esade Business School, their leaders shouldn’t forget that healthy competition is also essential.

Daniel has studied the internal tensions and conflicting logics of social enterprises within the same industry together with Solange Hai (CARE Nederland) and Chiara De Bernardi (IUSS – Scuola Universitaria Superiore di Pavia). They analysed social enterprises in the second-hand clothes industry to uncover the dynamics of cooperation and competition – or "coopetition."

Social enterprises have seen steady growth since the 1970s, with a significant acceleration after the 2000s. This growth has been the focus of much academic interest, with scholars examining the boundaries between non-profit and for-profit sectors and the differences between internal management structures.

Social enterprises typically work for the greater good, but their leaders shouldn’t forget that healthy competition is also essential

But despite the interest from academics, there is little understanding of what happens at an inter-organisational level between social enterprises within the same industry. Do they compete, cooperate, or both?

The research reveals that, while social and economic goals motivate social enterprises, there are three distinct levels that involve the combination of competition and cooperation: operational, stakeholder and environmental (or contextual).

The results of the investigation, say Daniel and his co-researchers, have important implications for the theory and practice of social enterprise management.

Although the activities of collection, sorting, and resale look very similar between organisations, the purpose can vary: providing a social service (cheaper clothes and job integration), preserving the environment (recycling), or raising awareness about a charitable cause (shops as information centres).

The organisations Daniel and his colleagues interviewed operated under one single brand name but each had their own distinct and separate organisation, with their own structure, financing and mission. This allowed the researchers to study a relatively small system of social enterprises, where they engaged in common activities but simultaneously competed for donations.

The analysis uncovered behaviours that were both cooperation-oriented and competition-oriented, a situation neatly described by the leader of one of the organisations: "Competition has always existed to a greater or lesser degree but always within a framework of sharing."

Findings: the three levels of action

At the operational level, coopetition allows social enterprises to exchange resources and share knowledge, but also to strive to become the organisation of reference in terms of operational and management innovations.

Coopetition allows to maintain quality standards and clear boundaries benefitting all organisations, but also can lead to disputes over resources

At the level of interacting with stakeholders, coopetition allows to maintain quality standards and clear boundaries benefitting all organisations, but also can lead to disputes over resources (e.g. clothes, permits) based on different views on how to achieve social goals and even on what their social goal really is. Even if these differences can become obstacles to cooperation, they can help the enterprises to advance their social goals, pushing them to innovate and expand.

This leads to increasing possibilities of hiring and training people excluded from the labour market (a goal of WISEs) which in turn enhances the legitimacy and cultural acceptance of the whole sector with a wider audience – the environmental level.

Together, these levels of coopetitive action help advance the economic goals and the social mission of all the enterprises.

In the cases studied, coopetitive relationships between social enterprises in the same field appear throughout the process, both through moments of external shocks – such as loss of donor funding – and calmer periods. Yet while the simultaneous social and economic goals of the enterprises lead them to cooperate and compete simultaneously, the level of tension (competition/cooperation; social goals/economic goals) depends on which level of action is underway.

Social entrepreneurs could benefit from understanding the dynamics of coopetition, rather than neglecting it

And, while the increase in the number of social enterprises might enhance overall positive social impact, this trend has important implications at the inter-organisational level.

The creation of more social enterprises could generate more competitive environments, but also more opportunities for cooperation. Such competition and cooperation can have beneficial outcomes, but managers should consider how the external dynamics of coopetition that result from this evolution unfold at different levels and interrelate with internal social-economic tensions.

If social enterprises simply assume that they need to collaborate with organisations with similar goals to increase social impact, they may be surprised when they find themselves having to manage coopetition, at its different levels, rather than solely cooperation. While the idea of a social goal might be usually associated with the assumption of friendliness, synergy and cooperation among likeminded organisations, social entrepreneurs could benefit from understanding the dynamics of coopetition, rather than neglecting it.