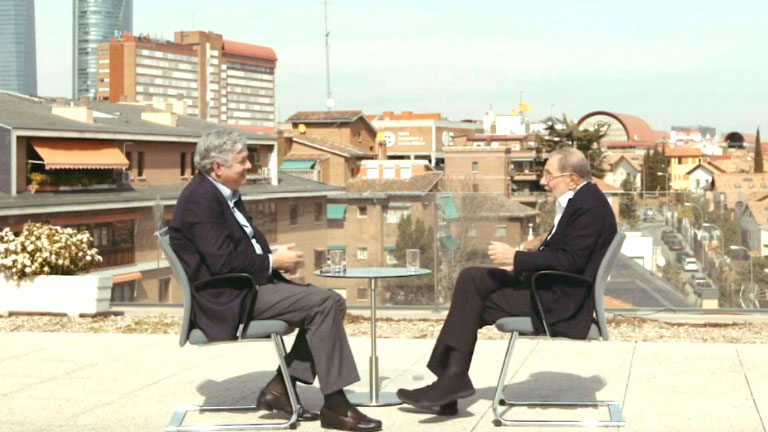 Where is the world heading?

Koldo Echebarria [Director General, Esade]: Javier Solana has been with us at Esade for quite a few years now sharing his knowledge, especially his wisdom and experience in international responsibilities. I must say he's a great teacher. He's someone who's very capable of sharing everything he knows with our students. Today we're going to talk to him about all these challenges. Through his wisdom, we will try to better understand the world we live in and the world our children will inherit.

Javier Solana [President, EsadeGeo]: I expected change, but not such a profound change and not one so far removed from the change I was expecting. The 21st century started in a way that was very peculiar. The drama started on September 11th, which was something that was so profound, we're still suffering its consequences today. Three years later, we were immersed in this senseless war: the Iraq war. It was a war that was started in violation of the United Nation's planned course of action. The war was carried out without the consensus of the UN and it broke up countries, societies and the western world.

Obama's election was a source of great hope

But if you ask me if I was expecting Trump, I would say no. I knew the USA was changing a bit, I knew a lot of US presidents well. Bush Senior, Clinton – I had an intense relationship with him for many years. I also had an intense relationship with Bush, where we sometimes had different standpoints, and Obama. Now there's Trump, who I haven't met personally. But for me, Obama's election was a source of great hope.

Javier Solana: Possibly. It was the first time someone of colour was president and racism is a factor. Racism in the USA runs very deep. So yes, I think it did leave a psychological wound, though I'm not sure it was deep enough to make Trump the next president. I think Trump is more linked to the economic crisis. If I was asked how I thought post-Trump America would be, I couldn't answer exactly, but what I do know is that it will be very different from pre-Trump America. This isn't a parenthesis.

The Trump era will leave some very obvious marks

The Trump era will leave some very obvious marks. The most important in my opinion is the relationship with China. Right now, China is experiencing huge growth. China has a much bigger global presence now. In terms of trade, relations have gone downhill and become tense again. I think the US is more obviously worried about China right now than it was under Obama. I don't think that's Trump. It's something more than Trump. So Chinese-American relations are extremely important.

Javier Solana: No, I didn't expect Brexit. Actually, I'd say that I still don't really believe it. But the exit of the UK, in my opinion, causes serious problems for the structure of Europe. I think that silly, strange thing, so to speak, that the UK had with the islands etc., contributed to a richer Europe.

Koldo Echebarria: I think it's an extraordinary loss that will affect the Union's future.

Javier Solana: I'm not so sure. Perhaps in the end, the exit of the UK, who some considered a somewhat uncomfortable member, will lead to better integration. I think it will be around the Eurogroup. It's something I'm very sympathetic to and I have hope that it will become a reality.

Perhaps in the end, the exit of the UK will lead to better integration

Koldo Echebarria: And what can you tell us about our neighbouring countries? I feel we don't have the capacity to deal with the challenges they have. The Arab world, Africa... Countries which, unless we find a shared, development agreement, are going to be a hotspot for tensions in the medium and long term.

Javier Solana: Look, the war in Syria, what it meant for Europe... We didn't get involved. But for Europe, the war in Syria is a most serious matter and one that's put us in a serious situation with regard to Europe's fundamental values. That's immigration. When two million Syrians arrived, it was because they were fleeing war. They came looking for peace.

Javier Solana: And if we'd brought peace to Syria before, that would not have happened, and we wouldn't have had this profound crisis, we're still seeing in Europe and which is also linked to the economic crisis, to the arrival and radicalisation of European populism. The worst thing is you don't realise until after it's happened. You don't see the possible consequences beforehand. In Syria we're back with Assad again. So we went from Assad... to Assad, with complete hell in the middle.

Javier Solana: There really is a very deep lack of vision.

Koldo Echebarria: Don't you think we also have to assume a more realistic role regarding who we are and what we can do?

Javier Solana: Yes, I agree we need to be more realistic, but we also need to be a bit more daring. In my experience, I joined the EU as the person in charge of security. The year was 1999. I'd come from NATO, where I'd been since 1995, and the situation in the Balkans was first on my list without a doubt. But I think that if we hadn't had the audacity – and I'm not saying it was all my audacity, but some of it was – to enter into Bosnia without having everything totally tied up... If we hadn't had that moment of audacity, we'd still have the war in Bosnia and nothing would've been resolved. You have to be a bit audacious, otherwise inertia sets in. And especially when you have to carry out a risky operation, because there could be serious costs if you fail.

If we hadn't had the audacity to enter into Bosnia without having everything totally tied up, nothing would've been resolved

But in the case of the Balkans, it was very clear to me. If we didn't jump in, it wasn't going to get resolved. And in my experience, the two times I've jumped in at the deep end, it's been successful.

Koldo Echebarria: You've been at Esade for a few years now, in a somewhat different role. I remember you once saying that you'd rather be in a "do tank" than a "think tank," which is kind of your spirit and what comes from your character and career. But I think being at Esade has helped you get to know the expectations of our young students as well as those of the directors that come through here.

Javier Solana: I'm having a great time and I'm very happy. I love teaching, I always have. I was a good physics teacher. I've always had that vocation for research, even if it was only in hard science, but I'm really happy. I'm also very happy because I'm finding myself capable of transmitting what I've experienced in my life, and focusing a lot on the good parts, not by exaggerating or telling lies, but by explaining things more from the perspective of hope and above all, by connecting things.

We need to understand past relationships, to understand why this is happening or why that happened. It's something I think my students really appreciate. The fact that I can say I was there, that blows the students' minds. You create that bond between teacher and student. They also love something I do a lot, which is to start the first day of class with a Financial Times headline. It might be about finance, then that headline leads to...

Javier Solana: And we start to see what I think is most important in education. And we really have the feeling that today, these students we're teaching are future leaders. They need to know the world, to know there's another world, a different world, a world that's suffered, where importance has been won and lost. China, for example, was the world's leading power... just yesterday! And it's becoming so again. So understanding the world, understanding countries, is essential if you want to do anything in the globalised world. I tell them every day, you are leaders. You've been very lucky and you have to give back some of what you've been given. So if you want to be leaders, be prepared to be leaders that give, not just receive.

Koldo Echebarria: How can we move forward towards a social pact that entails responsible capitalism but also includes businesses?

Javier Solana: I think the most efficient way to surely move forward is through climate change. Climate change needs us all. I think the long-term mission is essential. With no long-term mission, it's hard to resolve anything short-term, I believe. Short-termism is terrible. We have an obligation to make the world better, so we have to make it better every day. Not in every way, but in some way. And be able to go to bed knowing you've done something good.

We have an obligation to make the world better

A term about companies I liked: Corporate citizenship. It isn't very well-defined, but it means a company that, as well as making money, also contributes to society. It becomes actively involved in society, either as an individual or as a group, but that vision of it being about something more than just handing out money to others. I think climate change is going to have this same affect.