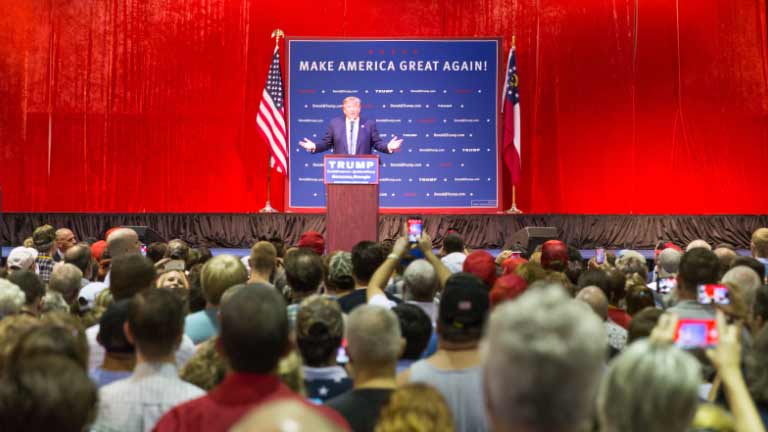 Why executives and investors may be underestimating political and geopolitical risk

Political and geopolitical risks are no longer a tail risk for business. A number of factors have converged to bring to an end the era of relative global stability that characterised the Western world after the Second World War, opening up a new period of political, geopolitical and economic flux.

Paramount among these factors is the fragmentation of the international world order brought about by the retrenchment of the US, which commenced under President Obama and is intensifying under President Trump, as well as the rise of new global powers, most noticeably China but also, in different ways, states such as Russia and Turkey.

This has coincided with a moment when the process of economic globalisation is coming face to face with some of the less positive consequences of its inner logic, particularly its deflationary impact on wages among large segments of the workforce in developed economies, helped along by the impact of technology on employment.

What makes this era particularly problematic is the fact that this is the first time in recent history that a global economic dislocation and a global geopolitical rearrangement have coincided. The collapse of the USSR in the early 1990s was made less destabilising by a steady international economic context, while previous economic shocks such as the 1973 crisis took place in a context of relative geopolitical stability.

There is evidence that business executives are quickly waking up to the salience and potential negative impact of these shocks. According to a 2017 McKinsey Global Institute survey, 84% of executives (the largest share in the survey’s history) believe that geopolitical instability will have an important or very important impact on global business, up from 61% previously.

However, less than one-third said that an understanding of these factors is extremely or very well integrated into their overall company strategy, and, more tellingly still, only 13% said that their companies have taken active steps to address risks derived from either geopolitical or domestic political instability.

A new world of political and geopolitical risk for business

Political and geopolitical risks can translate into a number of important risks to business. The first, clearly, is that military conflict could arise as geopolitical instability increases. Recent wars in Syria, Ukraine and Yemen are clear examples of this.

An analysis by Cytora Ltd., a Cambridge-based research firm specialising in geopolitical risk, identifies more than 100 potential scenarios for two nation-states to spark military conflicts in the next decade. The mere perception of the threat of geopolitical risk has been shown to have negative economic and financial implications.

Research by New York Federal Reserve Board of Governors economists Dario Caldara and Matteo Iacoviello has shown that the threat of geopolitical risk events leads to a decline in real economic activity and lower stock market returns, as well as movements in capital flows away from emerging economies and towards advanced economies.

Furthermore, the rise of geoeconomics and the weaponisation of trade, finance and other economic and market instruments is yet another risk that this new geopolitical age is creating.

Corporations are increasingly likely to find themselves in the crossfire of such actions, and they may suffer serious collateral damage.

Two areas where this is already clearly playing out are cybersecurity and trade protectionism. Recent examples include the US and China’s increasing use of economic tools to exercise political pressure on their adversaries (as in the case of Huawei) and the sanctions against Russia after the Ukraine conflict – and Russia’s retaliation.

In sum, geopolitics can have both direct and indirect consequences on corporations.

Political and geopolitical risks can also generate uncertainty and increase costs for companies operating not just in conflict regions but also at home.

However, assessing the impact of political and geopolitical risks is not straightforward. Most firms, while paying lip service to the relevance of these issues, actually do very little to properly incorporate geopolitical dislocations and associated political risks into their management and investment decisions and valuations.

The geopolitical dissonance of markets

The first reason why the actions and decisions of executives and investors may not be reflecting today’s geopolitical shifts is a belief that these events may not be that relevant or that, if they are, they may be a source of opportunity rather than risk.

After all, for the last three decades, most geopolitical events – the collapse of the USSR, the democratisation of Latin America, the opening of China, etc. – have been positive for free markets. Many investors still believe this will be the case.

Historically speaking, it is also true that geopolitical events have had little impact on equities in the short term, and even less in the long term. For instance, many had predicted vast negative effects when the UK public voted for Brexit and when Trump was elected, but these have not materialised. Instead, in the short term, markets have reacted positively.

A second reason may be the fact that executives and investors often consider attempting to assess the impact of events on markets to be a futile exercise. Geopolitical disruptions seem arbitrary and unpredictable to most financial analysts, who therefore consider incorporating these disruptions into their quantitative models to be a hopeless task.

There is, however, an alternative scenario: that executives and investors may be mispricing the potential negative implications of these events. After all, the fallibility of investors in assessing the impact of these issues is a reasonable assumption.

Market price consensuses reflect the average opinion of market participants. Most of these participants are financial experts with limited political and geopolitical expertise or experience, which makes the accuracy of their analyses and conclusions in this field rather limited. As such, it is reasonable to assume that asset prices, in so far as they reflect this fallible analysis, may not be capturing the potential negative impact of geopolitical events.

Investors may experience a certain cognitive dissonance – discomfort with and resistance against taking actions that go against one’s beliefs or value preferences – when it comes to incorporating their assessments of geopolitical risks into management and investment decisions.

Investors’ decisions may reflect a sanguine attitude towards geopolitical risk – which, in turn, leads to a preference for viewing geopolitics as a non-risk for business and markets.

A self-fulfilling prophecy is thus created, wherein geopolitical shocks are valued positively or their potential negative impacts are minimised. This dynamic distorts markets and conditions prices. But at some point, the gap between valuation and fundamentals, between wishes and reality, becomes unsustainable. And as Martin Feldstein once quipped, if something is unsustainable, it cannot be sustained.

In sum, a certain degree of cognitive dissonance may be blinding executives and investors to the risks that a change in the geopolitical paradigm may entail.

While isolated geopolitical events may be of limited impact, what we are witnessing is a more profound paradigm shift that may generate novel and underestimated risks. Should this be the case, making an effort to understand the potential consequences of geopolitical dislocations for markets would be essential, and the difficulty of doing so ought not to be a reason not for at least trying.

The changing political and geopolitical paradigm certainly poses opportunities to executives, but it also generates major risks that can hardly be ignored.

It is important to understand that these risks are not just ethereal macro issues with little direct impact on business operations and results, but rather threats that can directly affect businesses’ bottom lines and valuations, as the sterling’s devaluation following the Brexit vote attests.

Yet today there seems to be a pervasive complacency among executives regarding the potential negative impact of these risks.

President Franklin Delano Roosevelt famously said that we had “nothing to fear but fear itself”. One wonders whether today it would be more appropriate to say that if there is something to fear it is the apparent absence of fear.

While it is true that we are not currently facing the same sort of existential risk as in the Cold War, it is also true that that fear focused minds and, in some ways, provided the best insurance policy.

Today, in contrast, there is a serious risk of underestimating threats. This paradigm shift makes predicting political and geopolitical outcomes particularly hard. Nevertheless, this difficulty should not keep firms from trying to incorporate political analysis into their investment decisions.

This article is based on the knowledge insights of a position paper published by EsadeGeo.