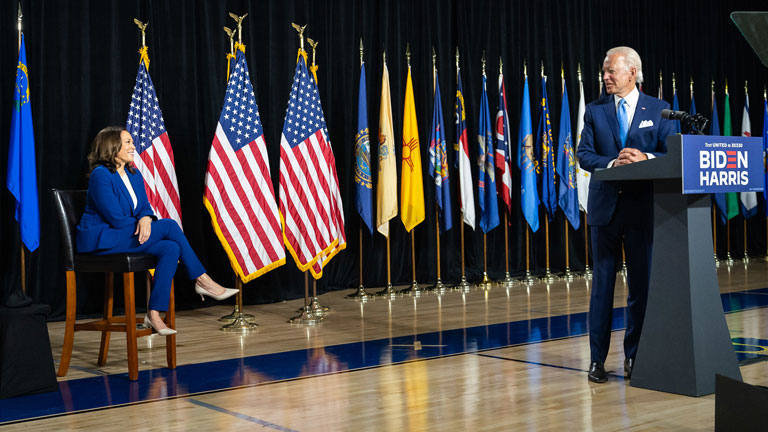 I’d like to praise boring democracy. I hope the hand-over ceremony features a boring speech by new president Biden followed by the ritual swearing-in and the musical performances typical of the very ceremonious political communications in the US. All televised live, of course, with help from YouTube, Facebook, Twitter and Twitch. All predictable. All organised. Nothing unexpected. Hopefully this ceremony will be the beginning of a return to normality, far removed from the excitement of a tweet, because it is anticipated that this presidency will face a string of political, social and economic crises.

In the political realm, the first cabinet suggests a continuity of Obama’s policies. The re-appearance of John Kerry, special envoy for climate change, Anthony Blinken, secretary of state, and Jake Sullivan, national security adviser, indicates a style and rhetoric of restoration.

There is more diversity, a sign of the times, with representatives of Latin, indigenous and Afro-American communities. Four women hold senior positions of responsibility, including Janet Yellen in the Treasury and Avril Haines as head of national intelligence. The role of this team is to drive change and lay the foundations for a Democrat decade. Kamala Harris, the natural successor, will be hugely visible in core matters regarding reconciliation. Harris’s mission will be to visit many Trump states with a view to solving US domestic problems, whilst preparing to be the 2024 candidate.

Hopefully this ceremony will be the beginning of a return to normality, because it is anticipated that this presidency will face a string of political, social and economic crises

The Republican party must decide about its future if it is to survive. Seventy-seven percent of its voters think Biden’s nomination was not completely legal and 45% still agree with the Capitol siege farce, so four years of tough competition in the Senate and culture war lie ahead. Trump’s legacy remains solid, particularly after Ronna McDaniel’s re-election as president of the national committee, ensuring that Trump supporters retain financial control.

Against this backdrop, the Grand Old Party will have to wait for the outcome of Donald Trump’s second impeachment before choosing its candidate for the 2024 elections. If possible, he’ll run for re-election. Otherwise, several other candidates will make a move. Ted Cruz claims to be the natural heir and was already a hero for Tea Party supporters. The new electoral base of 70 million means a real chance, for the first time, of a president of Latin American origin being elected. Senator Mitt Romney, one of the few critics of Trump, would be a half-hearted solution for a peaceful transition. Nikki Haley, former governor of South Carolina and former UN ambassador, renews the southern outlook. Congresswoman Liz Cheney, daughter of vice president Dick Cheney, is an anti-Trump Republican with experience in Washington.

There are several dimensions to the social panorama. Domestic divides (coastal/inland, rural/global, elite classes/impoverished middle classes, race, gender) have contributed to social unrest and mistrust of institutions. An ideal breeding ground for polarisation, provocation and protest: Trumps’ three Ps. Images of Washington guarded by 20,000 soldiers are a good indication of concerns about extremism. In the absence of social wellbeing, restoration is a mirage. The mission of the presidency involves regaining self confidence, reinforcing institutions and stamping out upsurges in racism, misogyny and extremism. There is no place for them in the “return” to Democrat America.

On a different track, Trump leaving office will not end the pandemic. Its harrowing trail of 24 million infected persons and some 400,000 deaths will continue to haunt us despite the change of tenant. As the prestigious Scientific American said recently, healthcare policies regarding this first, far-reaching pandemic must be assessed to ensure accountability and learn lessons. This won’t be the last pandemic. Scientists agree about this too, because of intense trade relations, globalised lifestyles and mass tourism. Biden might go for rebuilding the World Health Organisation and funds for global vaccination. We’ll see.

The mission of the presidency involves regaining self confidence, reinforcing institutions and stamping out upsurges in racism, misogyny and extremism

The economic crisis can be seen in the 19 million unemployed, the growing trade deficit with China, sky-high public borrowing and energy transition uncertainties. On the other side of the Pacific, China has a growth rate of 2.3% and a trade surplus of $535bn, the highest in the last five years. Biden and Harris’s response involves a series of stimulus packages worth $1.9tr, plus 440bn to deal with the pandemic and 350bn for income transfers in the form of local aid and state funding. In addition, $20bn will be invested in a national vaccination programme. Public spending will cover the stimulus but corporate decisions remain to be seen.

In the throes of the energy transition, the gradual sidelining of carbon and oil will have to rely on tariff barriers to protect the economy. The EU and the US could join forces to make climate change a mechanism for remedying the trade balance and bolstering the foundations of the new, post-pandemic, international order. The response to the signature of the Regional Comprehensive Economic Partnership (RCEP) and the investment agreement between China and the EU remains to be seen. The return of trading blocs to the international arena. To complete the picture, storms are brewing in the spheres of taxation on big tech companies and the design of competition policies.

Finally, mention must be made of the global disruption challenges caused by the crisis in the liberal international order (free trade and multilateral institutions) and deglobalisation. In Cuba and Venezuela, political change is always just around the corner. In Asia, it’s necessary to keep an eye on the repercussions of lifting restrictions on contacts with Taiwan and the response of continental China. A trade partnership with India which, like the US, is not an RCEP member, is also to be expected. Might the upsurge in Indian nationalism spearhead an alternative?

The situation on the Korean peninsula is a multiplication factor of stability. Going for a dialogue with Iran to slow down their nuclear programme is feasible although any return to the 2015 agreement is unlikely. Russia wants to come back into the international scene and needs some recognition of its moral authority in its sphere of influence (Belarus, Armenia). This affects the eastern dimension of NATO (and relations with Turkey!), and also the creation of the NordStream2 gas pipeline to Germany. The Saudi issue is important because Biden has said he wants to re-assess bilateral relations. The Western Sahara gamble paves the way for new scenarios in the Mediterranean and North Africa, who always keep a watchful eye on peace in Israel.

The out-going president took it upon himself to erode the political culture and foundations of Washington’s international action. Trump’s populist and anti-diplomacy impulses fostered the expansion of China, a country paying more attention to geopolitical change. In Latin America, Central Asia, Africa and the port of Piraeus, Silk Road infrastructures envisage investment capacity and political influence.

The US has a struggle on its hands to regain leadership in these places, in addition to dealing with specific problems. What’s new is that we Europeans have also lost faith in the pre-eminence of the US in this new phase of globalisation. According to figures published by the European Council on Foreign Relations (ECFR), Europeans are pleased about Biden’s election but envisage the need to review transatlantic agreements. In addition to this general approach, the new presidency must build its own strategic narrative in order to recover its international prestige. The storming bolstered the anti-Liberal discourse of a democracy in crisis. Without a strong US, the liberal and democratic political system will waver. We cannot allow this and the US will surely find an agenda of global governance in the European Union.

These problems already exist and we have yet to discover the black swans and grey rhinos of the coming decade. Turbulence won’t wait for Biden and Harris to settle in. The challenges start today.