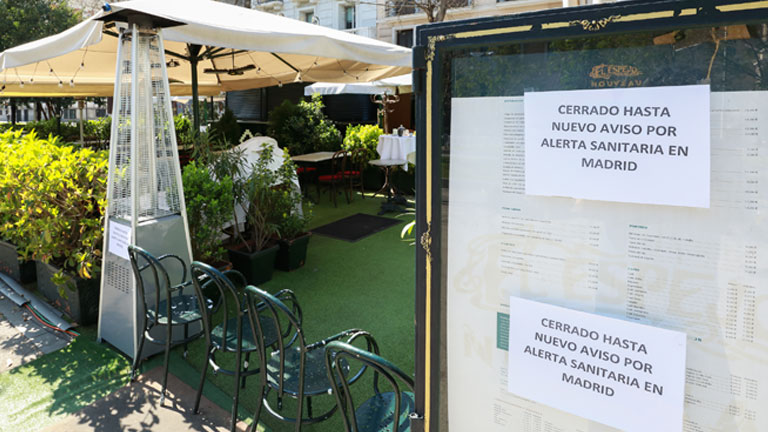 How many people lost their jobs in March?

The worst March in recent history

According to social security data published on 2 April, nearly 900,000 jobs disappeared in the second half of March following the start of the state of emergency.

This figure is equivalent to all the jobs lost in the first months of the Great Recession (between October 2008 and February 2009). A decade ago, it took more than 100 days to lose almost a million jobs: but now just two weeks was enough.

The net result for March is 834,000 fewer jobs than in February. This is the worst data since records began, despite the fact that results have been cushioned by authorisations for temporary layoffs (furloughs) and short-time working (known as ERTEs in Spain) which enable companies to partially or totally suspend work contracts for permanent employees. Once business activity resumes the companies must continue employing these workers for at least six months.

So why has registered unemployment only risen by 300,000?

Although the net number of jobs has fallen by nearly one million, the number of new jobs registered in official job centres reached some 300,000. The available data does not enable us to be sure what has happened, but it is probable that most of the jobs that disappeared were very short-term temporary contracts that are part of a vicious circle of "hire-fire-hire" (with the cycle now stopping on "fire").

Many workers "fired" in this way may not have yet signed on as unemployed – although they may soon do so.

It must be remembered that the available data reflects a static view of the job market. The month of March is traditionally a good month for job creation and would normally have created new jobs for many people. A study by FEDEA (Fundación de Estudios de Economía Aplicada) estimates that over an eight-week period around 1.7 million jobs will have not been created.

Who has been most affected by the destruction of jobs?

According to data from the Ministry of Inclusion, Social Security and Migration the destruction of employment has especially affected workers with temporary contracts. Almost 70% (613,250) of the approximately 900,000 jobs lost were temporary.

Most jobs lost were temporary

This confirms what we feared: most of the people who lost their jobs were temporary workers. And within this group, the incidence is higher among those with very short contracts (lasting a week, or even just a weekend).

Most of the people who lost their jobs were temporary workers

Unfortunately, the Spanish labour market is one of the most precarious in the developed world, and in recent years the percentage of very short-term contracts has expanded greatly and so made an increasing number of workers economically vulnerable.

In our previous article, we warned that due to the large number of temporary jobs in Spain, something like this was likely to happen. Indeed, when a crisis comes, companies usually make cuts by terminating these short-term contracts.

This situation has been aggravated by the fact that many temporary contracts are for less than six months (specifically, 56.3% of temporary workers who know the duration of their contract).

In addition, job destruction has been concentrated in certain branches of activity, mainly hospitality (a sector we considered to be at high risk of job destruction in our simulations), construction and artistic, recreational and entertainment activities, with job falls greater than 10%.

The hospitality sector is the worst hit for job losses

What is happening with the temporary layoffs?

Temporary layoffs (or furloughs) are another of the key elements for understanding what is happening. These are widely used in northern Europe to avoid permanent redundancies and give companies more flexibility. They were rarely used in Spain during the 2008 crisis and it is fortunate that they are now available.

Temporary layoffs cushion the impact of this crisis on jobs. We still do not have statistical information as to how many workers have been laid off temporarily. The Ministry of Labour cites the figure of 620,000 workers but acknowledges that more layoffs are still in the pipeline.

This delay is possibly because regional governments are still processing the paperwork, but more transparency from the corresponding ministry (similar to that shown by the social security ministry) is needed to better understand the current situation.

Temporary layoffs cushion the impact of this crisis on jobs

In a few weeks we will have the active population survey from the Spanish office for national statistics (INE) and we expect this will enable us to widen our analysis.

What public policy options can be implemented in this situation?

In Labour-related measures in response to the pandemic: protecting workers we propose various exceptional income protection measures aimed at those workers with least job security and who are most likely to suffer during the current crisis.

All these measures share two characteristics that we see as fundamental, especially in a situation like this:

What can we expect in the future?

As we explained in our first Policy Insight on the Covid-19 crisis, Spain is more vulnerable than most nations to a crisis of this type because of its exposure to sectors such as tourism and services, and the structural anomalies in its labour market (with a temporary employment rate that is among the highest in Europe).

The data confirms that jobs are being destroyed in Spain at a rate not seen since the return of democracy and with destruction concentrated among the most vulnerable workers (as has happened in the past). Protection mechanisms exist, some being new, but they remain complex and disproportionately focussed on the most protected sections of the workforce.

In the current crisis, a social protection measure such as basic income – which has already been argued for by EsadeEcPol and which the Canadian government recently launched – is a quick and simple measure that provides a wide umbrella of coverage. Proposals of this type should be under consideration by every government.