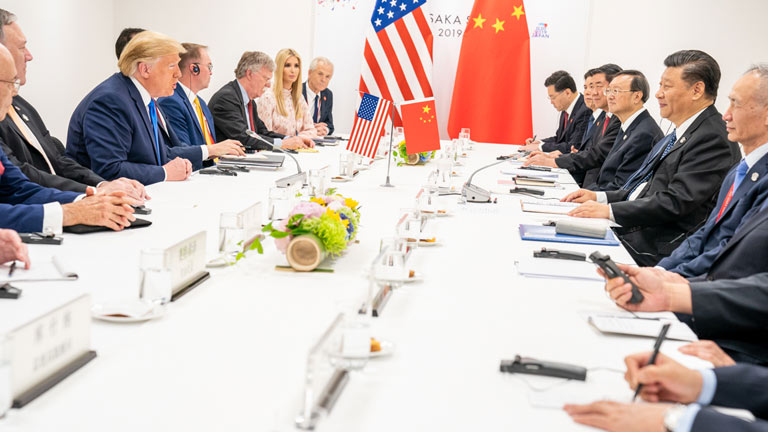 Could Covid-19 bring about geopolitical realignment?

What many in the West perceived as “just a flu” not even two months ago, despite the World Health Organisation’s dire warnings, has become the biggest pandemic in a century.

In the age of globalisation, with movements of people all around the world, it was only a matter of time before a virus would be able to sweep through borders and put entire continents at risk.

The infection potential of Covid-19, as well as the possibility of transmission by asymptomatic individuals, makes it more dangerous than previous spreads such as the SARS epidemic, and risks collapsing health systems in most countries.

Something else has changed: the role of the US. Since the election of Trump in 2016, the US has progressively retreated from the main stage in global affairs. Not only that, but the president has declared war on experts and technical committees, such as the global health security office of his National Security Council, disbanded in 2018.

Now, the country which has long been considered as the predominant power in the world has shown no signs of leadership in the face of a global crisis.

On the contrary, Trump has repeatedly denied the magnitude of the problem. With the former global Leviathan absent, other world powers have tried to project some of their hard and soft power during this outbreak, particularly China and the EU.

Barely two months ago, the Chinese regime was perceived by some as closer to a possible political change after a faulty reaction to the epidemic in the province of Hubei.

The government was accused of hiding knowledge of the virus between November and January. Chinese authorities limited visits from the WHO to Wuhan and shunned assistance from the Centre for Disease Control and Prevention.

Lenin once said that “there are decades where nothing happens and weeks where decades happen."

Something similar has happened in terms of worldwide attention to Covid-19, and regarding the repositioning of China as a global actor throughout this crisis.

Now, in the absence of the US, Beijing is launching a strong diplomatic campaign to become the world leader in the fight against the coronavirus.

Through an effort that we call poem diplomacy, because of the poetry verses enshrined on the packages sent by China to governments around the world, the Chinese government is taking a dual approach.

China has taken the offensive, as it tries to shift the blame for the initial expansion of the pandemic to the US by, for instance, spreading a theory connecting the origin of the virus to a US army visit to Wuhan.

It is also attempting to present itself as a friend of those countries struggling with the coronavirus. By shifting its industrial power to the production of masks, test kits and respirators, China has emerged as a key supplier of critical material for those most affected by the outbreak.

Spain signed a deal last week for €432 million worth of medical supplies, while Italy bought 1,000 ventilators and two million masks for an undisclosed sum.

The Chinese government has been able to frame these deals as humanitarian gestures by a superpower concerned with global health, despite being mostly commercial agreements rather than donations, and the flawed quality of many masks and test kits sent to Europe.

We can expect the results of this campaign of poem diplomacy to be limited. One of the main problems China has in terms of projection of global leadership is its institutional structure. China remains an autocracy, and the EU’s stance on Uyghur rights or dissident silencing in China is unlikely to change drastically, even if European countries continue accepting Chinese help to contain the virus.

Indeed, the regime could face an increased legitimacy problem at home if there are more outbreaks in the country, as protests within China would probably rise, and its carefully-crafted narrative of a tough but responsible country would fade away.

At this stage, it is impossible to make accurate predictions about what the future holds. There are, however, possible scenarios that are worth exploring.

The first is a reckoning by the US of the dangers that the coronavirus poses to our societies, and an impulse for more science diplomacy with China.

The second is an escalation of the hostilities, both rhetorical and commercial, between both countries.

Finally, a combination of both scenarios is also a possibility, with increased tensions paired with cooperation in certain areas to defeat the virus.

Meanwhile, the EU and its member states have stumbled through their response. EU nations have provided more aid to each other than China has, and yet, despite the complaints by French president Emmanuel Macron, they have been unable to display their mutual assistance in public narratives.

Two issues remain: firstly, some member states – such as Germany and the Czech Republic – prevented the export of masks and medical equipment, thus depriving Italy of much-needed material until the Commission intervened.

Secondly, as Chenchen Zhang puts it, we should not compare China’s aid to foreign countries with the assistance that members of an economic union and political alliance give each other.

Medical exports from the EU have been made subject to member state authorisation and the first-ever medical supply stockpile has been created through the rescEU mechanism.

Some member states prevented the export of masks and medical equipment

When the limitations on exports of medical material were announced, Serbian president Aleksandar Vučić spoke on TV and, visibly angry, stated that European solidarity was a myth, and that Serbia could only count on Chinese help. China immediately agreed to send a plane with medical supplies and six Chinese doctors to Belgrade.

In the week following Vučić’s press conference, several things happened: firstly, the EU gave €38 million in immediate relief and mobilised €373 million in aid for the six non-EU countries in the Western Balkans, namely Albania, Bosnia and Herzegovina, Kosovo, Montenegro, North Macedonia and Serbia. Secondly, and after years of vetoes by different member states, the Commission finally managed to open accession negotiations with Albania and North Macedonia.

Thirdly, a renewed Eastern Partnership was presented and, on Spain’s suggestion, the Commission will consider a package of coronavirus-related aid for the Southern Neighbourhood. A new action plan for human rights has also been presented. Furthermore, Montenegro, North Macedonia and Serbia are all included in the EU’s medical stockpile, as they are part of rescEU.

In short, the EU’s internal and external action is now almost exclusively dedicated to fighting Covid-19, with the exception of those countries that fall under the mandate of EU NEAR (candidate, potential candidate and European Neighbourhood Policy (ENP) partner countries). For these countries, EU action seems to be more proactive than usual. The EU has good reasons not to waver in its commitments to these states, given the geopolitical implications of the Covid-19 crisis.

These neighbouring countries, with the exception of Israel, which barely takes part in ENP initiatives, have several things in common:

If the EU does not provide that help, somebody else will have to, if disaster is not to erupt at the Union’s doorstep.

With both the US and Russia looking inwards, only China can fill that gap. And, as Vučić showcased last week, Xi Jinping is more than willing to do so.

Indeed, Serbia, on top of its complex relationships with Russia, has been playing a double game with China and the EU for a long time. Whether EU member states can coordinate a common economic response will be significant, as an internal loss of trust could put its external action at risk.

Towards a cacophony of world powers

The US seems to have abdicated its former position as global watchdog, and can barely handle the outbreak at home. Still, the alternative powers who could claim its role have also shown weaknesses in their responses to the coronavirus crisis.

China’s own repression of free speech and authoritarianism enabled the pandemic to spread in the first place, and no amount of aid can change that.

Russia currently shows little concern for what happens beyond its borders, and while the EU has a better chance of using its normative power to lead by example and multilateral cooperation, its institutional architecture and deep divisions among member states will not make it easy.

The development of the vaccine, possible new outbreaks and the ability of each superpower to re-start their economies will surely be relevant variables in the world to come.