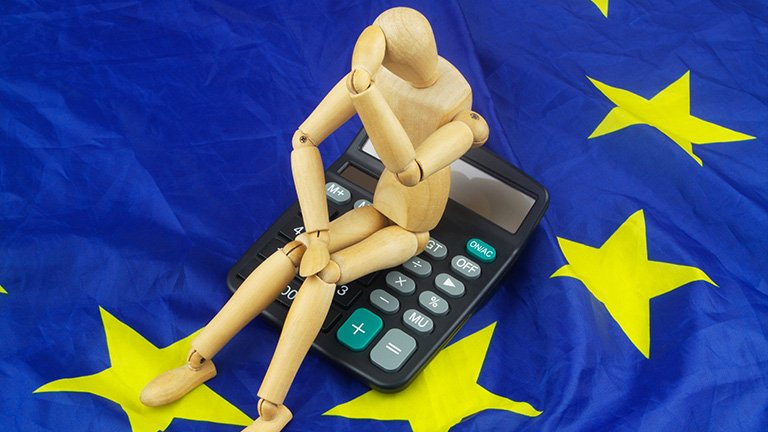 The energy crisis, inflation and interest rates: a new dilemma for the EU

There are no easy solutions to the inflationary situation. Some may cause an economic slowdown or undermine fair competition on the single market

So far, good news has been at a premium in the 21st century. On the economic front, the 2008 financial crisis sparked a public debt crisis in the Eurozone, which led to fears for the stability of the European project. One only has to recall then ECB president Mario Draghi’s “whatever it takes” speech in July 2012.

When that crisis appeared to have been overcome, the economic crisis caused by the lockdowns to contain the COVID-19 pandemic arrived, with unprecedented falls in GDP. In April 2019, Spain received no international tourists at all for the first time since records began.

And just when the days of face masks appeared to be over, the invasion of Ukraine has brought us back to inflation rates of 10%, a level hitherto unseen by first-time voters in the forthcoming municipal elections of 28 May.

EU is a net importer of energy, with a 58% dependency ratio

There was no doubt that Russia's invasion of Ukraine and the legitimate sanctions imposed by many members of the international community would lead to a crisis in energy markets. The European Union is a net importer of energy: in 2020, its dependency ratio (net imports over energy consumption) was 58%, with two main products, oil and gas.

Moreover, before the invasion of Ukraine, around 50% of gas imports came from Russia. An increase in the price of energy means an increase in production costs, which is transferred – at least partially – to the price of other products, although many European governments are taking steps to contain energy prices.

Spain inflation is to some degree structural, efforts to bring it down will be more costly

According to the latest data published for the Spanish economy, consumers face underlying inflation of 6.9%. This rate does not take account of energy or unprocessed foods, and so it tends to be less volatile than the CPI rate (which includes energy and fresh foods). Underlying inflation is now above the general inflation rate of 5.8%.

The first conclusion to be drawn from this is that inflation in Spain is to some degree structural, not just cyclical, and this implies that efforts to bring it down will be more costly in terms of economic growth.

It would appear that Europe is incapable of providing a unified response to the energy crisis, and although it is easy to criticize this difficulty to act as one, there are reasons for it.

The power generation mix varies greatly across Europe: nuclear power generation is dominant in France, whereas Germany has practically closed its nuclear production capacity, and coal-burning generation is relatively more important. For its part, Spain relies heavily on combined cycle power plants that require gas. Norway plays in another league, with its high capacity for generating hydroelectric energy.

These differences offer an insight into why, while on the one hand Spain is proud of the Iberian exception, on the other hand Germany is concerned that limiting prices will reduce supply and spell catastrophe for its industry.

Furthermore, the granting of subsidies, with countries that have different capacities for increasing public expenditure, means that situations may arise in which subsidies from countries that are more generous towards their productive fabric artificially affect the fair competition between the companies that operate on the single market.

None of this is helped by the oligopolistic nature of the electricity market. In Spain, for example, electricity generation is mainly dependent on three companies: Endesa, Iberdrola and Naturgy. It is essential not to lapse into demagogy; the presence of few players in a market does not necessarily lead to practices that are not very competitive. However, certain conditions – and a small number of companies with high market shares is one of these – can be conducive to these practices.

In fact, in Spain, the National Securities Market Commission has fined electricity companies, for example, in 2014 and 2017. This has not just occurred in Spain, for the four largest electricity operators in Germany have also faced a similar situation.

Moreover, payment in the wholesale market with a marginalist system – so that the price set in the auction is paid to operators that are capable of production at a lower cost – has led to a broad debate about what are known as windfall profits.

In this respect, the electricity sector is a complex industry in which more regulation does not always mean better regulation, and where taxation is an alternative tool through which income can be redistributed, but a watchful eye must be kept on the effects it produces. There is a big difference between taxing companies on extraordinary profits obtained and taxing them in proportion to their revenue. Therefore, the measures to be applied must weigh up the short and medium-term effects they produce.

The unequal effect of inflation

One indisputable consequence of the current energy crisis is the sharp increase in inflation. Once again, Europe is not only experiencing a rise in inflation, but also substantial inflation inequality between its Member States. This inequality has always existed, but the current crisis has accelerated it.

If we take the Harmonized Index of Consumer Prices as a means to compare the different members of the European Union, whereas Spain or France had rates of 6.7% and 7.1% in November 2022, rates in Germany and Italy were 11.3% and 12.7% respectively. Meanwhile, rates in the Baltic countries of Latvia, Lithuania and Estonia were more than 20%.

In this context, the European Central Bank has begun to sharply increase interest rates in the wake of the increases approved by the US Federal Reserve, and this, as always, puts pressure on the euro-dollar exchange rate. Increases in interest rates, despite representing a genuine headache for families with variable interest mortgages, which account for about a third of all mortgages contracted, are here to stay, at least for the duration of 2023.

A rise in the interest rate shrinks demand, and this contributes – albeit at the cost of lower economic growth – to a certain degree of price containment. A strong euro – in the last three months the euro has increased its value against the dollar by around 9% – helps to contain import prices. If import costs fall, thanks to a stronger currency, there is a slowdown in the growth rate of inflation.

Increases in interest rates are here to stay

In short, the combination of national policies to contain energy prices and the policy of the European National Bank is helping to moderate inflation, but at the cost of lower economic growth.

Forecasting economic growth is a risky exercise: as a result of the uncertainty surrounding the war in Ukraine, the rise in geopolitical tensions, and doubts concerning the reliability of China's economic data, coupled with the Asian country's high level of debt and the crisis in its housing market, economic forecasts range from cautiously optimistic to highly pessimistic.

In this respect, the European Commission foresees a slight recession in 2023, with GDP falling by 0.3% in Germany, while it is predicted to rise by 0.4% in France and Spain, and by 0.2% in Belgium.

An economy with lower growth is not necessarily bad news

Nevertheless, an economy with lower growth, if this is accompanied by a significant moderation in inflation rates, is not necessarily bad news. It is the price to be paid in order to avoid the entrenchment of high inflation rates, which lead to greater inequality of income distribution. The good news is that the European employment market appears to be more resilient to lower economic growth than in past crises.

Lessons from the current crisis

As with past crises, there are lessons to be drawn from the current one. For example, the importance of supplier diversity in strategic industries like energy, or the capacity of Europe to provide a response, but also the difficulty of finding a balance between efforts to show solidarity with other countries and the individual needs of each Member State.

In addition to these lessons, there is also the importance of efficient market regulation that fosters de facto competition – and not only formally – and finally, the need to avoid populist measures that are not very effective and to focus efforts on public policies that support the most vulnerable.

Associate Professor, Department of Economics, Finance and Accounting at Esade