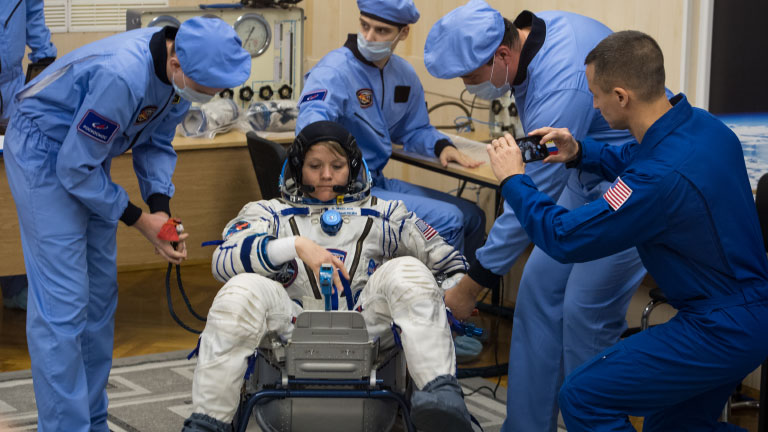 In 2019, NASA astronaut Anne McClain should have taken part in the first all-female space walk with Christina Koch, but she ended up missing out because NASA hadn’t adapted the torso of her spacesuit to her body.

According to studies conducted by the University of Virginia, women have a 17% greater chance of dying in a car accident and 47% higher possibility of suffering a serious injury than men.

The root cause of these results would seem to lie in the design of safety mechanisms, tested over time only on the basis of male standards.

A number of American universities have for decades been pushing forward a range of work-life balance policies intended for both sexes.

In 2016, the German Institute of Labour Economics (IZA) released its conclusions on a study conducted of all the assistant professors hired by the top 50 American university economics departments between 1985 and 2004. The goal was to determine whether a gap year in their research after having children would improve promotion rates among academics, in particular, those of women. It was found that the probability of a man securing a tenured post rose by 19% in the first year, while for women, the rate fell by 22%.

These are just some examples of what is known as data bias: the subjective inclination of information that makes us blind or without a clear perspective.

This is an age-old cognitive lapse, but it has currently had more serious ramifications as a result of the diverse range of markets, customers, ideas and talent that define the world we live in.

From an economic standpoint, data bias means missed business opportunities in a consumer context estimated to grow by around a billion and a half (diverse) people over the next five years. In a scenario in which technological connectivity empowers consumers and the vindication of their needs as never before, knowing and understanding others becomes a crucial strategic target.

Individual and group silos can lead to totalitarian biases

From a social and organisational perspective, data bias leads to the creation of isolated structures (individual and group silos) where value does not flow. This causes power dynamics to stagnate due to their being detached from reality, running the risk of giving into totalitarian biases.

Often this is not deliberate, which is also why data bias is not perceived as something pathological, although it is, in fact, a severe cognitive dysfunction.

The root of the problem lies in the fact that the person in a position of power – or who made a certain decision – failed to consider that things might be different from how they had been judging them until now. Perhaps because they weren’t sensitive enough to consider that others might be different, or they didn’t have the habit of painstakingly asking for different opinions.

“Normality” was configured, by default, from the encapsulated universe of whoever was in possession of this power of decision and, in the words of Criado Pérez, would simply render “otherness” invisible.

From the lofty perch of the hegemonic power of “normality”, any vindication of the “other” tended to be perceived as a problem of identity, either unnecessary or, in the best of cases, simply “nice to have”. It is a case of us vs. them, so much so that “they” are impersonally called a “group” (or “minority group”), even when they represent half the population, in the case of women.

Unfortunately, as Garcés points out, that “us” is not a common space. It is an exacerbation of the “I” (ego). We don’t actually speak in first person plural (we): we speak in the first person in the plural (I+I+I…).

This is precisely why some experts argue that there must be a commitment to an inclusive leadership that changes this way of (not) seeing in order to make organisations better.

True, perhaps, but formulated in isolation the solution ends up being partial.

There is undoubtedly a need for people with decision-making capacity, who have the essential skills of inclusive leaders: collaboration, commitment, value orientation, humility, courage, adaptability, cultural intelligence and self-regulation.

Diversity is not attained solely from a group of inclusive leaders

But diversity is not attained solely from a group of inclusive leaders, much less if they are “leaders on paper” (one of the greatest dangers in some of the literature on leadership resides in that its readers identify themselves with leaders described with overly generic and aspirational characteristics).

This explains why there must also be inclusive management processes. Recalling Kotter, leadership is necessary, but so are operations and machinery.

In this setting, communication processes are essential. Calsamiglia and Tusón would say that through the spoken word we begin and maintain relationships with others. So the more democratic, integrative and free a society (or an organisation) is, the more space to talk there will be.

Can we find out what employees need or want if managers do not ask them? Couldn’t the errors that we referred to at the beginning have been avoided if they had talked to women, instead of silencing them or speaking for them?

We know that a “space to talk” is not just a material space, but also a psychological and symbolic one. It is not the same to ask for an opinion as to garner one, in the same way as to give a voice is not to take it under consideration.

Consequently, if we speak of communication as a tool for inclusion, we must speak of a communicative contract: an agreement in which the parties interact on the principle of conversational cooperation, with negotiation and respect as the necessary terms and conditions of the process.

This “space to talk” is deployed to a greater or lesser extent, on the basis of how a series of norms are put into practice:

There is no inclusion when there is little or no recognition and acceptance of the other as a valid interlocutor (scant negotiation) and/or when the identity and image of the other is disregarded or neglected (low respect).

On the other hand, an organisation will be considered inclusive in line with its assertiveness and empathy; i.e., for its capacity to be clear and precise and promote a dialogue free of ambiguity, confusion, or “discursive offences”, which are always the result of misunderstandings, stereotypes, incomprehension or conflict.

Speaking well encourages the art of listening. Active listening is clearly one of the best tools for integrating knowledge, knowing how to interpret what is happening around us and what lies ahead, and making intelligent and inclusive decisions.