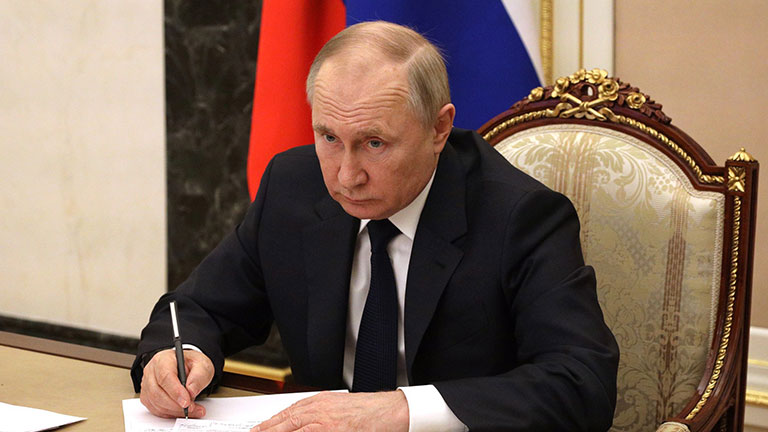 Putin or the lack of leadership

Currently, there is interest in comparing the leadership of Volodymyr Zelensky with that of Vladimir Putin. And although attempts have been made, such a comparison is not possible. Let us examine why. We will all agree that leadership refers to a process whereby an individual influences a group of individuals to achieve a common goal. Thus we may conclude that without influence, leadership does not exist. We will also agree that, unlike other constructs, leadership requires evaluation by “others”, individuals who can provide us with information about the degree of influence they perceive or feel, for this is the only observable indicator.

Theories about leadership could be distinguished according to how others observed this influence. Thus, it can be seen in the characteristic features of the leader, in their behavior, the contingency of their actions, in the type of relationship they establish, in the degree of intrinsic motivation they promote, in how accessible they are perceived to be, in the degree of harmony they achieve, the emotions and feelings they arouse and manage, and even in the means they use to communicate with others. So, what role would be played by virtues such as integrity, the ability to inspire trust, honesty, transparency, being a visionary, having the capacity to inspire, provide meaning, motivate, encourage, persuade, unite, feel empathy, compassion...?

If we look at the reality around us, we find that many supposed leaders obviate these virtues, basing everything on communication. In recent decades, the “leaders” of political parties, in particular, taking advantage of their visibility, and having discovered the crucial role played by negative emotions in the capacity to wield influence, have opted exclusively to incite these emotions. Trump and Bannon homed in on them when they designed their strategy to reach the Capitol. And it is these negative emotions that initiated and are now promoting the war that to a greater or lesser extent afflicts us all.

Around us, we find that many supposed leaders obviate leadership virtues, basing everything on communication

In the case of Trump, we could refer to a dissonant style of leadership which, based on a situation of asymmetric power with his collaborators, led to the latter steadily losing their ability to think critically and becoming more dependent on the leader, as if they were hostages. Thanks to this disconnection from the needs of the other, it was easy for him to circumvent any dysfunctionality in the management of the team and focus exclusively on the achievement of objectives.

However, his friend Vladimir can be placed in another paradigm. He has created a “casus belli”, in which there is a risk to the homeland, religion and security (in its many forms). In his citizens, this has activated all the mechanisms of fear that “justify" any action of defense. All this would appear to automatically justify the only kind of leadership that he probably knows, authoritarian leadership.

It would only “appear" to be an authoritarian leadership, given that the context constructed in this situation is ideal for controlling, which is the opposite of leading. “Leaders” who fuel fear do not lead, they manipulate, for instead of inspiring action, they encourage avoiding it. This supposed "leader" has it easy. Hierarchical organization, a clear chain of command, collaborators with little autonomy and without the opportunity to take decisions, and therefore without responsibility.

The context constructed in Russia is ideal for controlling, which is the opposite of leading

The leader is omnipresent, so that the team does not relax when it does not feel the pressure of punishment (the teenage son syndrome). There is no doubt that the “reward and punishment" approach brings changes and immediate results. Furthermore, the more despotic authority is wielded, the more dependent the team becomes, and the more it will need instructions, regulations and organization. Just look at all the examples of this in the history of the 20th century! How many leaders have “come to the rescue" of misgovernment with the words "we must prevent chaos" on their lips!

In summary, the supposed leader must: 1) peddle nostalgic narratives that idealize the past; 2) promote conspiracy theories that arouse fears of a threatening, insecure and frustrating future, so there is a tendency to look for “the protective leader" whose rhetoric will allay fears; 3) camouflage themselves in an "overprotective" paternalism with the subtext of "if you do what I tell you and just as I tell you, you will not be punished, I will protect and reward you”; 4) look courageous and say what they think, and of course offer simple solutions which are not, therefore, open to argument; 5) conceal information and remain faithful to a narrative. In the post-truth era, facts count for little if you are coherently overly-simplistic: black or white, us or them, with me or against me.

Let us not lose sight of the objective here; if I start shooting and bombing, if I can at any time press "the button"...that releases those negative emotions, the ones that make the sympathetic nervous system direct our thoughts and reactions, emotions that foster confrontation or flight, what need is there for leadership, communication or persuasion, for fostering autonomy and responsibility, or for promoting intrinsic motivation?

Therefore, as we observed at the beginning, in this context it is not possible to use the term leadership. Clearly, it would not fit any definition of leadership, nor would it come close to its metric, which, as we noted earlier, would of necessity imply the perception "of the other", and this would be mediatized in a highly emotional manner. There would be no use of judgment here, just some basic emotions, sadness, anger and above all fear.

But what if, instead of mobilizing negative emotions, which generate an artificial cohesion based on fear, we were to be capable of moving towards a world where citizens are considered to have the capacity to choose, and where positive emotions which inspire and lead to action are reinforced? We would then be capable of creating opportunities for reflection that would open the door to other perspectives, from which it would indeed be possible to reason, evaluate, understand and even, perhaps, make a diagnosis.