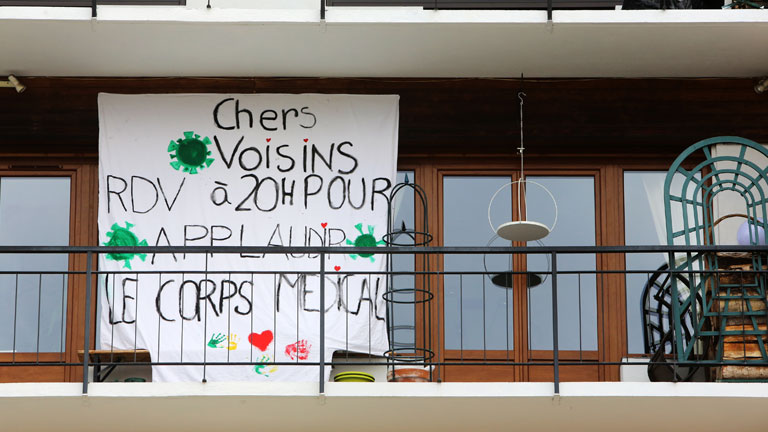 Solidarity in times of confinement: with whom, how, until when?

How do people interact with each other during times of confinement? Which novel forms of sociality are emerging and what can we learn as sociologists about collective behaviour? How is the world envisaged by those who, by distancing themselves from crowds, enable the formation of communities?

All these questions seem important to us. Thus, while trying to cope with the reality of improvised home-schooling, intensive cooking, vigorous home cleaning and never-ending online meetings, we aimed to capture individual perceptions and practices during confinement through a research project. As a result, we have obtained a snapshot of our time during confinement that has collated some 500 responses to a qualitative survey from people all over the globe.

Hopefully, the paper will appear in the future. However, as a preview, we would like to highlight some reasons for optimism: these critical times of isolation have offered a glimpse of the power of solidarity. This social force could be boosted to generate an alternative and more humanistic society. As the saying goes, we cannot let this crisis go to waste. Not this time. The impotence of scholars working from home can be offset by paying attention to the myriad of examples of communal solidarity blossoming around us.

In exploring the reaction to confinement, there is an initial moment of reckoning or acknowledgment of what we might call the paradox of distance. Future historians might refer to the current period as the time of "great social distancing", but would this characterisation be accurate? Does physical distancing involve social distancing or, on the contrary, has it helped communities to emerge in new and unexpected ways?

Our preliminary reading of these responses has revealed that confinement is being experienced primarily as an altruistic action. This is particularly true for younger individuals for whom the virus does not translate into any perceived significant danger. As one respondent mentioned: "I am not really worried about myself, but rather about my family and my neighbours, who are mostly elderly people. I don’t want to be responsible for their suffering or death."

This responsibility is also referred to as a "social obligation", not only towards specific individuals but also towards large groups and institutions.

By staying home and thus decreasing the social toll of this pandemic, people are expressing the will to support the healthcare system and employees in sectors deemed essential. Hence, at least in this specific moment of time, social distancing is probably not the most relevant term for capturing the reality we are experiencing. There is a whole other communal reality emerging.

At the individual level, confinement admittedly poses a test for human relationships, but similarly it affords the time to reflect on who is important to you, who you can count on and who you crave to meet once the epidemic is behind us.

At the community level, it also introduces different modes of socially accepted behaviour, such as when social pressure is aimed at constraining individuals from going out for reasons seen as illegitimate.

Confinement is being experienced primarily as an altruistic action

This can be explained through the logic of reciprocity that is emerging in this new social reality: the physical, emotional and cognitive efforts of an individual to resist going for a stroll on a sunny day become harmful when others don't make the effort to stay at home too. As expected, respondents have provided vivid and emotional descriptions of those people, while characterising them as individualists and enacting some forms of social control and punishing mechanisms in the name of solidarity.

If confinement does not necessarily imply social distancing, what practices are people adopting to approach each other when physical proximity is not possible?

A thirst for a "new social pact" seems to be emerging amongst people who appear to do three things at the same time: connect emotionally, provide resources to each other and help promote confinement amongst their peers.

These three types of practices are not necessarily applied equally, in the same form and towards everyone, but are revealed in different layers of intensity. Bonding with and caring for family and close friends are the main priorities; neighbours, doctors and employees in sectors deemed essential come next. At the outer level, there is care for the broader community.

Firstly, emotional connection is being expressed mainly towards the family and close friends and it is experienced as a constant effort to keep them busy and entertained, while maintaining a positive environment.

At the neighbourhood level, individuals are taking the opportunity to introduce themselves to each other, share moments and discussions, or amuse each other from their windows or balconies through music or cinema.

We also observe how this newly experienced closeness has led to acts of solidarity towards the elderly and those who live alone, like neighbours celebrating the birthday of the old lady next door. Turning to doctors and employees in sectors deemed essential, support is being communicated through clapping, through various expressions of gratitude and forms of greeting. Finally, people are showing emotional support to the broader population by sharing options for online entertainment and communicating with people who live alone.

Secondly, in terms of material support, this is usually being provided through the flourishing initiatives that seek to help with needs, or essential purchases for the community.

Though especially aimed at family and neighbours, it also involves conscious effort to support local businesses instead of big businesses: "because we saw how dead our streets are without them". Here again, the blossoming of initiatives to support the poor and the elderly are coming to the fore.

For the broader community at large, we find people crafting or donating material to healthcare units, generating content for online education, or crowdfunding ideas aimed at tackling the social havoc generated by the pandemic, or for medical research projects. At times, food, provision or casual ad hoc shelter, is being offered to healthcare staff or the homeless.

Thirdly, all these efforts to provide emotional and material support seem to demand a tight chain of reciprocity. Individuals are trying to convince (or even coerce) family members and close friends to follow the confinement measures. They are putting control mechanisms in place by judging harshly those neighbours who do not comply with the rules of confinement, or those who hoard goods or purchase unneeded medical gear in unprecedented amounts. Finally, they are taking on a self-imposed obligation to spread trustworthy information to make sure that their broad network of contacts is convinced about the severity of the pandemic.

Up to this point, what we have (and we are aware of this) is just a snapshot of a given moment in the experience of solidarity during times of confinement. Alternative realities are emerging on the margins of our analysis.

The wave of spontaneous solidarity is matched with the rise of authoritarian tendencies; soldiers are taking to the streets to help fight the pandemic while making a silent and controversial assertion of their role as saviours against the menace of this invisible enemy. Rightly, public debates also point to the relationship between affluence and confinement.

Understandably, confinement can be seen as a luxury, as a manifestation of the intrinsic inequalities in our societies. Gig economy workers keep being exploited to serve those who can afford confinement. As a result, mobility has not reduced but expanded in some segments of low-income workers.

Similarly, we read about homeless people breaking into second residences to take care of themselves (and others) by putting themselves in confinement too. Is confinement not obligatory? Is it not an individual right? Is confinement and solidarity a shared reality, or only one for a privileged portion of our population?

Hence, unintentionally, the virus reveals an understanding of the right "community", the true demos, with whom to be in solidarity with; it leaves aside, once again, ample segments of our society pushed once more to the margins.

To close, let’s go back again to hope. Asking our respondents about the subsequent changes in our social and political relationships, we have observed a wish to enhance the importance of human relationships and, consequently, a desire to alter their social and economic priorities.

At the outer level, respondents hope for a rebalancing of the status quo that will do justice to the heroes of this pandemic. At this point, we cannot help but notice that they are not particularly optimistic about the capacity of the public alone to accomplish this gigantic task. This new social momentum needs to be matched by exerting pressure on policymakers. Power struggles are always there.

All the above-mentioned realities point in different directions. Many incentives and motivations are hidden behind these apparently altruistic manifestations of solidarity. We cannot be naïve. The reality of confinement is not uniform, and, for the large majority, there is nothing appealing about it. Confinement masks many embedded contradictions, but as one of our respondents in the survey stated, this is an opportunity to remember the society we would like to be.

We can only agree with this view. If we want to construct a world where egoism and competition are not the leading forces, we might very well find inspiration in the new forms of genuine solidarity displayed during these difficult times.