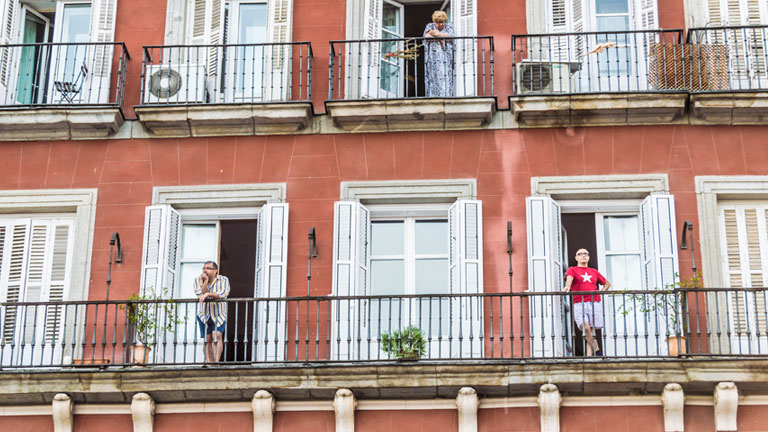 In Spain, some 8.5 million people (18.4% of the population) experience social exclusion. In around half of the cases, the exclusion is severe.

In addition to job insecurity and their invisibility for political parties, one of the main challenges this large group faces is access to safe and adequate housing.

But the housing problem does not affect only the poorest or most vulnerable layers of society. Increases in home purchase and rental prices, which have far outpaced wages, mean that, of the population that rents, 42% have to allocate more than 40% of their disposable income to housing.

In this context, the insecurity faced by young people seeking to live independently and gentrification processes are the order of the day and affect society as a whole, especially in large cities.

As the housing problem has grown, new actors have emerged.

First, there are investment funds, which came to Spain in the wake of the 2008 crisis, buying up extensive real estate portfolios from savings banks and other financial institutions.

Second, there are grassroots platforms, such as the Platform for People Affected by Mortgages (PAH in Spanish) network, the more recent "tenants’ unions" and other more or less belligerent "neighbourhood unions."

Third, there are political parties that have been elected to govern under the banner of guaranteeing access to housing.

And, fourth, there are those who seek to capitalise on the tumultuous times (not always legally): mafias that profit from illegal squatting, companies that offer to evict people by threat of force, or people who decide not to pay their rent or mortgage under the belief that the matter will not be taken to court.

Like all major challenges facing society, housing is a complex and systemic problem

Given the lay of the land, many of us wonder who is to blame for the current state of affairs, and who will be able to afford to live in cities in future.

These and other issues were raised at the Film Forum session organised by Esade Alumni a few weeks ago to watch and discuss the documentary film PUSH, by Fredrik Gertten. The film depicts the difficulty of accessing housing in cities such as Barcelona, London, New York or Seoul, and singles out large private equity funds (sometimes called "vulture funds") as the primary cause, due to speculation and the unrelenting focus on maximising profit.

In the discussion that followed, several issues were raised that have also caught our attention in the context of the research project we are conducting on the topic at Esade (together with Professor Ignasi Martí and other researchers).

First, like all major challenges facing society (climate change, inequality, security), housing is a complex and systemic problem. No matter how easy it may be to look for a culprit to focus our anger on, the reality is far more complex and points in several directions.

Large investment funds do, of course, have more power and, therefore, a greater share of the responsibility. However, other players should also consider their role in the current situation.

Local and national governments must become aware of past mistakes and the need to prioritise policies that promote accessible housing.

Grassroots platforms must decide whether their role is solely to be critical and to put on the pressure (which is sometimes necessary) or also to seek viable plural solutions.

As for the investment funds, in addition to embracing socially responsible practices and looking beyond short-term profit, there is a clear need to think about more systemic changes.

The key should be to rethink housing so that it is not simply a market to attract investment but, above all, a sector that guarantees universal access to this human right.

Once a certain consensus has been reached on this point, which is crucial to rethinking the type of society and cities we want to live in, the crux of the matter will be how to achieve it.

That will require medium- and long-term policies and strategies unconstrained by any given ideology.

A first step could be to look at what is being done in other countries. Some examples include mandatory affordable housing quotas for all new development projects (England), rent control (New York) and the large-scale purchase of housing to convert into social housing (Berlin).

However, above and beyond specific policies – which must be discussed, measured and evaluated – the key will lie in the cultural and structural changes put on the table: housing as a right, the market as a tool (rather than an end in itself) and cities as spaces for co-existence and forging social bonds.

Assistant Professor of the Department of Society, Politics and Sustainability at Esade