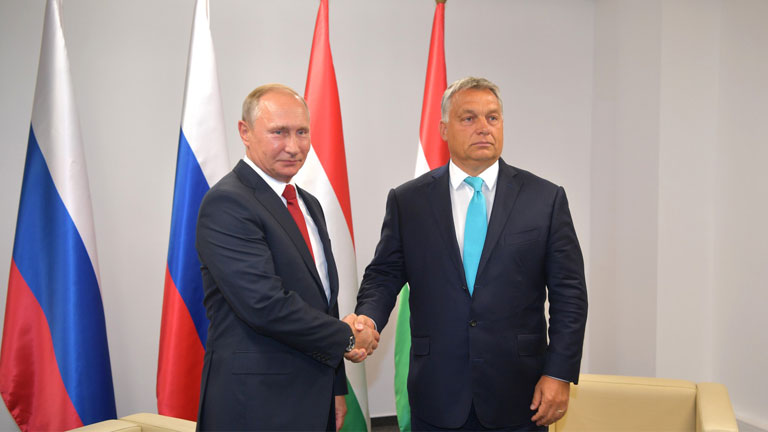 How Hungary drifted away

At the pandemic’s outset, my colleague Tirso and I already speculated about Covid-19’s potential to provoke geopolitical realignment amongst the EU’s closest partners and neighbours. Almost a year later, the EU is struggling to react coherently to a more assertive China and a hostile Russia and it has had to overcome numerous internal hurdles, like approving the Multiannual Financial Framework and the Covid-19 recovery package.

If one digs a little deeper, oftentimes the source of these obstacles or vetoes in the EU has been the same: Hungary. Self-declared illiberal leader Viktor Orbán has become infamous in anti-populist circles for dragging the EU down: politicians from Obama to Juncker have denounced his methods. Indeed, even George Clooney has spoken out against him.

And yet, the extent to which Hungary has strayed from geopolitical unity with the EU has been relatively underreported. This article aims to provide an analysis of the current state of affairs and examine the impact this phenomenon has for EU governance, for businesses operating in the country and for the Hungarian people as well.

Whither land of the Magyars?

Hungary’s Fidesz-run administration is known for its confrontational approach to EU partners. From effectively expelling Central European University (CEU) to Vienna, blocking much needed funds over a rejection of transparency and due-process clauses associated to them, or consistently vetoing a common migration policy since 2015, Fidesz has stayed true to its Hungary First policy, even when that has caused friction within the EU.

Perhaps emboldened by the tacit support of German leadership —probably given as a pragmatic nod to German carmakers, responsible for 4-6 per cent of Hungary’s GDP—, the Hungarian government has not hesitated to ignore rulings from the European Court of Justice, notably on irregular migrant pushbacks, NGO funding and the establishment of universities accredited abroad.

During the pandemic’s first wave, Orbán imposed draconian lockdown measures and rule-by-decree. He used the latter to take on a Chinese loan to build a railway line between Budapest and Belgrade, later classifying details to ensure they were not subject to public inquiry.

A few months later, in a much more serious second wave with people dying by the hundreds every day, the government contented itself by cracking down on LGBTQ+ rights, further manipulating the electoral law to its advantage and imposing mild mobility restrictions—because the economic outlook was not good.

From Budapest with love—or not

Hungary’s ‘out-of-line’ politics has serious implications for Europe’s geopolitical position. Nowhere is this more visible than in the case of Budapest’s relations with Beijing and Moscow.

Quite surprisingly for a staunchly anti-communist administration, and much like its neighbour and ally Serbia, Hungary regularly cosies up to the People’s Republic of China. Whilst many European countries are expelling Huawei from developing their 5G networks, the company has its largest supply centre outside of China in Budapest, as well as an R&D centre, representing 0.5 per cent of Hungarian GDP.

As mentioned, China is also financing the railway connection between Budapest, Belgrade and Athens. However, ties between Hungary and China spread beyond the economic realm.

After having effectively expelled CEU’s American operations from Hungary over fears of ‘foreign interference’ and refusing to comply with the European Court of Justice’s judgement that would allow for its return, the government announced with great fanfare the creation of Fudan University’s first European campus in Budapest — including a public subsidy of over €2 million.

Fudan University, regularly ranked at the very top of Chinese research universities, came under fire from the international academic community when it decided to remove “freedom of thought” from its charter in 2019, adding instead a pledge of loyalty to the Communist Party of China’s mission and values.

More recently, the Hungarian government decided to exclude both the EMA and the Hungarian medicine agency from the vaccine approval process. Rather, a governmental decree will validate any vaccine for which the Minister of Foreign Affairs confirms it has been applied to one million people in three countries, at least one of which must be an EU member or candidate state.

This seemingly random legal provision has allowed the government to almost immediately buy enough doses of the Chinese Sinopharm vaccine to vaccinate 250,000 people a month. This happened only a few days after having bought 2 million doses of the Russian Sputnik vaccine.

Hungary is also very keen on enjoying warm relations with Russia. In the wake of Navalny’s arrest following his return to Moscow from Germany, the EU and its member states strongly condemned this politically motivated prosecution, calling for Navalny’s immediate release and threatening to impose sanctions.

Orbán, not content with blocking a joint EU statement on the issue, actually sent his foreign minister to Moscow that week to seal the purchase of Sputnik vaccine doses. Russian Foreign Minister Lavrov was apparently not very happy with the visit and was seen in social media claiming that a Hungarian interpreter had stolen a pen from the Ministry.

Hungary is very keen on enjoying warm relations with Russia

Russia and Hungary enjoy cordial relations, though. Russia is Hungary’s first energy supplier and it is financing the expansion of Paks, the country’s only operating nuclear plant which produces 50 per cent of the country’s electricity. Hungary also serves Russian interests by blocking Ukraine’s military rapprochement to NATO on the grounds of its discriminatory practices against the Hungarian minority in the Ukrainian region of Transcarpathia.

The dangers of running a business in Orbán’s land

Hungary ranks 52nd in the Ease of Doing Business ranking, and 47th in the EsadeGeo/FTI Global Nonmarket Country Index (out of 125). Orbán’s friends, oligarchs and cronies have, over the past decade, won most tenders and public procurements, and taken over entire economic sectors in a formal procedure known as System of National Cooperation (NER).

Few independent media exist in the country after Orbán’s allies bought most outlets and then donated them to a state-owned press foundation controlled by government allies and excluded from competition rules. In February 2021, a Hungarian court forced the country’s last independent radio station to cease operations, drawing criticism from US authorities.

Hungary is also the country with the worst record in terms of corruption and embezzlement of EU funds. Meanwhile, Orbán’s father has won tenders to build public highways at inflated prices, and Lőrinc Mészáros, Orbán’s childhood friend and a pipe fitter by profession, has seen his wealth increase 3,840 per cent between 2015 and 2019 —compared to Jeff Bezos’ 260 per cent—, making him Hungary’s wealthiest man today.

Other businesses may also see their interests threatened, even if an oligarch has no competing interest. For instance, when Budapest Airport’s owners (a German conglomerate) refused an unsolicited purchase offer by Orbán’s allies, the government decided to starve the country’s main entry for EBRD Covid-19 relief funds.

Not even the country’s currency has been spared. The forint is amongst the EU’s most unstable currencies, and György Matolcsy, president of Hungary’s central bank (MNB), is Orbán’s right hand and not at all independent. After cyclical devaluations, the MNB’s exchange rate speculation during the Covid-19 crisis led to a 12 per cent devaluation of the forint against the euro—along with a quadrupling of the central bank’s profit in comparison to 2019.

Is Hungary a mole in the EU?

The EU has taken some steps in the right direction, like the new rule of law report and the rule of law mechanism attached to the EU recovery fund. But these are not enough unless they are applied well and the ‘power of the purse’ is extended to all EU funds feeding directly into Orbán, his family, his allies and his cronies.

It is easy to see why the European Union’s democratisation and liberalisation discourses are not credible in the Western Balkans, the Eastern Partnership and the Southern and Eastern Mediterranean regions when this kind of behaviour by a member state’s authorities is tolerated within the Union.

After all, the Merkel-brokered compromise over the rule of law to break the impasse on the EU’s budget and recovery fund will let Orbán get away with his behaviour long enough until he can, through the illegitimate use of funds and the law, attempt to win a fourth consecutive term in 2022. No wonder even George Clooney dislikes him.