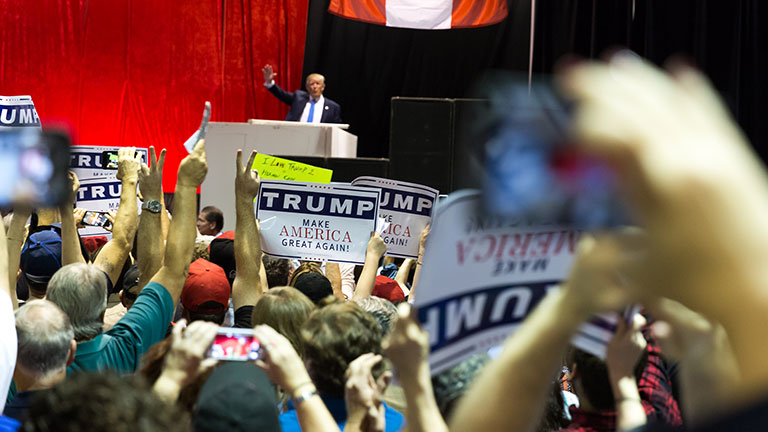 He lies an average of 26 times a day. He says we should forget about Covid, there is nothing to worry about and we should look to the future. In a country in which more than 200,000 people have already died, he calls the person in charge of coordinating the emergency health response an idiot for contradicting him. It is discovered he has hidden accounts, he is proud of not paying taxes, and he acknowledges debts of more than 400 million dollars, but he cannot say who he owes, and he doesn't care, because, he claims, the amount of money "is a peanut".

Well, in spite of all this, and the fact that we could add to this string of confirmed incidents and outrageous declarations, many millions of US citizens will vote for him in the forthcoming presidential elections. From the perspective of leadership theory, how can this be explained?

Given the wide variety of theories about leadership and the limitations of a short article, we will offer some explanations based on just two theories that we believe to be the most appropriate to an examination of leadership in the post-truth era: the emotional leadership theory and the e-leadership approach.

These two theories have been chosen in the awareness that, with the predominance of relativist and post-modern ideas, post-truth is flourishing, and this provides fertile political ground for dishonest leaders. They have also been selected because the short-term perspectives of the parties run the risk of generating a reactionary mentality, rather than promoting a vision of serving society. Finally, and no less importantly, because the economic crisis of 2008, the digital revolution and the boom of social media have led to a collapse of public trust and have affected the mindset of the individual.

The emotional leadership theory explains leadership as a resonant, harmonious relationship between the leader and those around them

First, the emotional leadership theory explains leadership as a resonant, harmonious relationship between the leader and those around them, built on the basis of a shared vision. The leader appears as someone who manages group emotions and generates the conditions conducive to a particular organisational climate or, in the case of politicians, a particular social atmosphere. This role is especially relevant at times of change.

Change always has a strong emotional component. In a period of dramatic changes and serious threats (to North American hegemony, employment, health, ...), one would imagine that the basic functions of a leader are, in the first instance, to tell the truth and to provide accurate accounts of events, and subsequently, to recognise the importance of the emotional impact that these changes have on citizens and to use this information to help them overcome the changes.

On the other hand, what if the leader uses nostalgic narratives that idealise a fictitious past reinforced by conspiracy theories, thereby arousing fears about a dangerous future? Today, we know that negative emotions are much more powerful than positive emotions, and that as a result of these emotions our sympathetic nervous system directs our thoughts and reactions (Jack, et al., 2013).

History has shown us that in the face of insecurity and frustration we tend to look for the "strong man" who will protect us. It is always a character who uses his rhetoric to allay fears and insecurities. Who appears to have the courage to say what he thinks to combat the invisible forces that threaten us. Who understands our worries and the emotions that these cause, offering supposedly effective solutions to problems. Thus the credibility and popularity of a person depend on maintaining an allegiance to a well-told story, even when it is at odds with factual evidence, scientific opinion or literal truth (Gabriel, 2004).

The second theory, the e-leadership theory (Avolio et al., 2001), understands leadership as a social influence process mediated by advanced information systems to produce a change in the attitudes, feelings, thinking and behaviour of individuals, groups and organisations. It goes without saying that social media and the new communication media have an enormous impact on political campaigns and action. Indeed, they modify our paradigm – our perspective of reality, of what is true and how we approach the truth – as well as our mentality, influencing how we see others.

Today, by analogy to natural ecologies, we note that different historical periods have characteristically distinct narrative ecologies (Gabriel, 2016), in which different types of narratives and counter-narratives emerge, interact, compete, adapt, develop and die.

History has shown us that it is in periods of crisis, in which the aforementioned strong man narrative prevails, that narcissistic leadership thrives more than ever (Foroughi et al., 2019).

Both theories are conceived to play a part in improving effectiveness in the exercise of leadership, assuming that the capacity to influence is applied with honesty and is subject to public scrutiny. But the leader must be capable of acting contingently and of understanding what type of leadership is appropriate in each situation. We know that many politicians feel very much at home in a post-truth scenario, and that their mental focus is on themselves rather than the public good. Well then, if the paradigm is what it is, the diagnosis is clear: Trump adapts to the situation better than Biden.

Steve Bannon, Trump's political strategist in the last elections (now in Italy instructing the far right), recognised the capacity of language and social media to produce 'fake news' and to launch demagogic populist ideas. He knew how to turn questioning of facts into an argument (Ball, 2017) and to reinforce a leader's capacity to influence based on the narrative.

In contrast, Joe Biden's strategy is too entrenched in the cognitive (he has failed to learn from Obama, who appealed to positive emotions, or from Trump, who resorts to negative emotions, which, as we will recall, are more powerful). The strategy here would appear to be to let Trump bury himself under his own excesses, while perhaps Biden is aware that if he agrees to play Trump's game, there is a very good chance he will lose.

Paradoxically, in this way he abandons his role as a manager of emotions and runs the risk of appearing to many as someone who is distant and lacking in empathy.

Or is this such a paradox after all? Investigations in neuroscience have proved that an over-emphasis on task-oriented leadership has an antagonistic relationship with a leadership focused on more emotional and social aspects, and vice versa.

In fact, it is the underlying neural activity inherent to one of the types of leadership that tends to inhibit the neural activity corresponding to the other (Boyatzis et al., 2014). It is plausible, then, that Biden's style, which is more cognitive than emotional, and so politically correct, places enormous limitations on his capacity to connect (or resonate, as Boyatzis et al., 2002 would say) with large audiences.

Joe Biden's strategy is too entrenched in the cognitive

It is difficult for academics to admit that the narrative ecology of the post-modern paradigm is defeating the facts, the data and, in short, the scientific method that we try to explain in our classes.

The question now is: thinking back on the events of the last elections, in which Trump's victory was due more to votes against Hilary Clinton than to votes in his favour, could in all irony history now repeat itself with Joe Biden? Could he win, due less to his own merits than to votes against Trump? It is plausible that Republican voters (not Trump's supporters) have become very disappointed and tired of Trump's reliance on histrionics and unbridled manipulation. This is a clear reflection of the leadership crisis that currently afflicts many nations around the world, with narratives being used essentially to influence negative emotions.

Addendum: The DSM-IV-TR diagnostic manual of mental disorders, which is widely used by psychiatrists and psychologists, defines the narcissistic personality disorder as a general pattern of grandiosity, need for admiration and lack of empathy. One of the criteria used to identify to what extent subjects show symptoms of a narcissistic personality disorder consists of the following set of questions:

The threshold for diagnosing this narcissistic disorder is set at five (or more) affirmative answers to these nine questions. We can guarantee that as an instrument of measurement there is sufficient evidence of its construct validity and it is highly reliable. And although it may beggar belief, the questions were not formulated with a particular subject in mind…