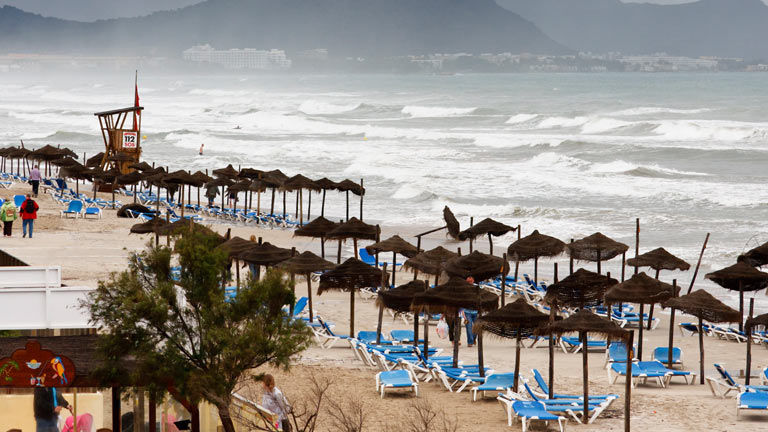 A powerful Atlantic storm named Gloria, and a very high-pressure system over northern Europe, recently pushed a storm front towards the southeast of the Iberian Peninsula. On reaching the Mediterranean, this front rotated cyclonically (counterclockwise in the northern hemisphere) to face the Spanish coast.

Strengthened by unusually warm waters (a local TV station showed images of people swimming on the beach in Barcelona), the front then brought very strong easterly and north-easterly winds racing towards the northeast corner of the Spanish Mediterranean.

Gloria was a very large and intense storm that affected all of Catalonia for four days (with precipitation of some 300 litres per square metre, 3 to 5-metre-high waves and winds above 70-80 km per hour with extreme gusts).

The effect of Gloria on our anarchic and largely unplanned system of construction and development resulted in numerous deaths and substantial economic damage. These consequences would have been much worse but for the efforts of firefighters, police and voluntary civil protection units.

However, it would be stupid and irresponsible of us not to learn lessons from this "exceptional" storm.

Firstly, we must recognise that we have absent-mindedly occupied spaces that are part of natural bio-physical processes.

Rivers, coastlines and deltas are dynamic and inter-connected natural systems, as well as habitats that shelter ancient ecosystems. A failure to understand these facts means endangering ourselves, and more seriously, others.

The much-discussed deltas, or wetlands, are fertile plains that have been historically managed by farmers who understand this environment and accept that flooding is inevitable. Industrialising these activities, or placing industrial and service sector installations in these areas, is obviously and inescapably precarious.

Due to our occupation of lands that are part of bio-physical processes, we have excessively denatured our natural systems

Secondly, due to our occupation of lands that are part of bio-physical processes, we have excessively denatured our natural systems.

We have reduced the size of beaches, rivers, deltas, lagoon areas, and generally, any wetland. In many rivers and deltas, wetlands are now much larger many kilometres upstream, than at the river mouth (where we have taken possession and settled on the flood-prone areas).

We use these wetlands for our needs, as if their other environmental functions are irrelevant. Rivers form beaches by dragging sediments into the sea; and rivers provide the nutrients that are necessary for the productivity of coastal areas. Rivers form channels and a natural habitat for many species with numerous missions in nature; and rivers channel the water so that we have firm dry land.

We have historically managed our natural environment very badly

A river is not just water for drinking, or for irrigating, or for cooling boilers, or for adding to consumer products. We have historically managed our natural environment very badly.

Thirdly, this inappropriate management is now unlawful. The philosophy and objectives behind European directives and recommendations on the natural environment changed at the end of the last century, and this has meant that our legislation has also changed.

However, we have managed to look the other way and reduce these regulations to the most minimal expression and lowest common denominator.

Moreover, we have falsified evidence of compliance. All of these standards recommend, or require, an ecosystem management approach wherever activities are developed that are linked to the natural environment. This does not happen. Spain signed a binding document ten years ago obliging us to manage the Mediterranean coastal zone. It has not been implemented. We do not understand our relationship with nature.

Gloria has been described as "exceptional" between quotation marks. Much has been spoken about climate change and whether Gloria is one of the consequences.

Yet solid data shows that a warming trend is producing climate change; the earth-atmosphere energy balance has changed, and the Earth's surface is getting warmer. As the temperature of the atmosphere increases, sea temperatures and evaporation rates also increase – and so the ice caps shrink and sea levels rise.

We must change our relationship with nature as soon as possible

We are certain about these and other effects. Climate models for the future suggest that extreme events will become more frequent in the short, medium and long term (as can be seen in the Global risks report 2020 published at this year's World Economic Forum in Davos).

Climate change has increased the temperature of the Earth by one degree in the last 250 years. Climatic models tell us that in 25 years, the temperature of the Earth will increase by another degree, or maybe two. There will be stronger and more frequent storms, and they will be mixed with droughts. Perhaps we should begin to describe Gloria as "unusual," rather than "exceptional."

In light of the above, a logical conclusion is that we must change our relationship with nature as soon as possible; otherwise, nature will take its toll and the damage will also spread to private organisations.