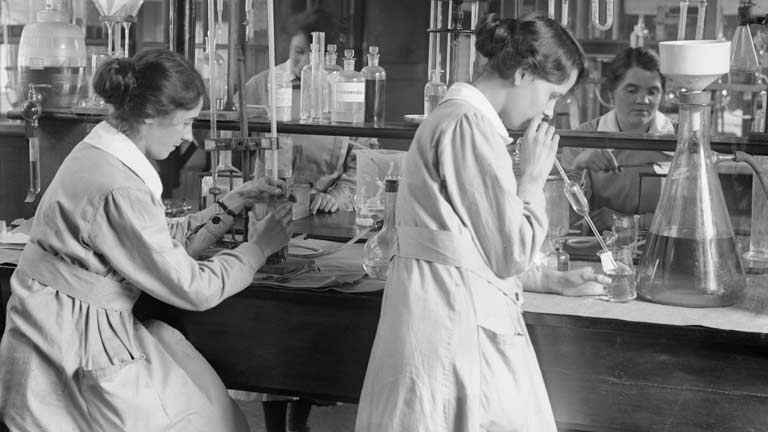 Women working in a laboratory in 1918 (Photo: George P. Lewis)

Singled out is the title of a book by Virginia Nicholson, an English author famous for her books about women in the first half of the 20th century. The protagonists are some of the two million women whose dreams came to an abrupt end when they lost their husbands in World War I.

They had been brought up to be nothing but wives, mothers and housewives, and suddenly they were cast into a different world.

But they survived, learnt to be independent and managed to reinvent themselves. This obliged them to study, work, create their own informal networks and set up small businesses alone or in groups.

Unwittingly, these women had undertaken a new journey in Europe: the battle to take control of their own lives.

History is full of anonymous heroines around the world who seized the reins of their own future – driven by necessity or a desire to rebel – and fought for an egalitarian world in which women had the same rights as men.

This ambition seems logical and fair, and yet a glance at what is happening around the world and a study of the numbers of women in different sectors of the economy, science and culture reveal that the idea of a world with gender equality remains a utopia.

Only 30 of the 600 biggest companies in Europe, for example, have gender equality. In addition, a comparison of the wages of men and women in similar jobs shows that women in Spain still earn an average of 12.2% less than men.

Finally, despite steadily increasingly numbers of women entering university, they still only account for 28% of all research personnel around the globe.

The figures are similar in other realms: the situation is the same. In fact, it is said that if the rate of progress in recent decades were extrapolated, a girl born today would have to live more than 200 years to have the same rights and opportunities as a boy.

Men and women who are particularly aware of these issues know that we can speed this process up and that each of us has, within our own sphere of influence, the ability to become an agent and accelerator of change.

I have always said that education, be it primary, secondary or university, is one of the most important social agents for making things in general change.

Within this framework, our business schools must step forward and assume our responsibilities.

A few years ago, Patricia M. Flynn, former dean of the business school at Bentley University, gave a talk with a rather controversial title: “Do business schools help reduce gender imbalance or not?”

After reminding the audience that business schools are well equipped to help increase the numbers of women in positions of leadership, she then mentioned several facts: although more than half of BBA students are women, the percentage falls to 35% of MBA students and is even lower on senior management programmes.

These figures should prompt everyone working in the world of management training to take action.

First of all, a gender mindset should be incorporated into all lines of business, i.e. into our courses, research and social debate. Here are some possible measures: