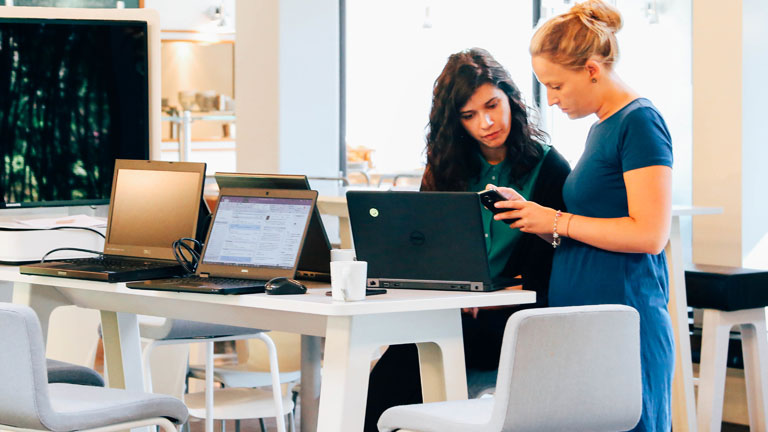 ...and why men must break their own glass ceilings.

It is no news that women tech leaders have a harder time climbing the ladder. Only 10% of American executive roles in tech were held by women in 2018 according to the Entelo Women in Tech Report.

Data from tech career marketplace Hired also shows that women receive job offers that pay less than their male counterparts 63% of the time – despite applying for the same jobs at the same companies.

Caroline Ragot, co-founder of Women in Mobile and CPO at Onebox, sat down with Do Better to talk about why tech firms need to invest in female talent, how women can reduce the pay gap, why gender-biased algorithms can hinder hiring processes and why men also experience discrimination in their careers.

Do Better: Why do tech companies need female talent?

Caroline Ragot: It is not just us female executives who need gender equality. In fact, it is CEOs who need gender balance the most. Diversity is known to drive innovation and profitability.

When researchers from Peterson Institute for International Economics examined the profitable firms in their sample, they found that going from having no women in corporate leadership (the CEO, the board and other C-suite positions) to a 30% female share is associated with a one-percentage-point increase in net margin – which translates to a 15% increase in profitability for a typical firm.

Diversity is known to drive innovation and profitability

Why are female tech leaders still a minority?

The most obvious reason is the ongoing struggle to find a work-life balance in executive roles. In high-ranking positions, many companies often demand unconditional availability. I think this is a mistake – you shouldn’t have to work a large number of hours just because you are part of an executive team.

Working late doesn’t make you more productive. Your brain needs to rest to be efficient and make better strategic decisions. So especially if you are an executive, you cannot afford to be overworked, overwhelmed and tired because you need clarity and vision to make the most important decisions for the future of your company.

I also think that women lack sponsorship to advance into leadership, and worse, I think that most women don’t see this and thus don’t even consider entering into the game of office politics. As an article from Harvard Business Review explains “People’s tendency to gravitate to those who are like them on salient dimensions such as gender increases the likelihood that powerful men will sponsor and advocate for other men when leadership opportunities arise."

I’ve seen this happen many times in recruitment processes. A tech executive recently told me at our Women in Mobile event that she wanted to apply for a Head of Data position, but she was having serious doubts about sending her resume. The reason, she said, was that she was very skilled at data insights and machine learning, but not as proficient at data engineering.

What did you tell her?

I told her to apply for the job because her work as Head of Data would not be about being the most experienced expert in the team, but about having a clear strategic vision and making her team grow to be their best version.

The State of wage inequality in the workplace report states that women make 3% less than men for the same tech job.

I think that sometimes women still make less than men for the same tech job. I don’t know all the reasons behind it but in my experience, I have seen that men show better salary negotiation skills than women.

I see this pattern in the 20-people team I’m leading – women tend to be more uncomfortable with salary negotiations than men. I remember a CEO friend who once told me that while men in her team asked her for a salary raise every year, the women never asked for one...

Is gender equality a utopia in the tech sector?

I want to be an optimist and think that the tech sector will reach gender balance. As an executive in a tech firm and as a citizen, what worries me the most is knowing that we don’t have enough women holding positions in artificial intelligence, data science and machine learning. These technologies are going to disrupt all industries and markets – they are going to change the world in which we live.

Yes and no. Machine learning is based on existing data, which means that it looks for patterns in available data to predict the future. If the data that the algorithm uses to make predictions is biased, then predictions will have these same biases and discrimination. If recruiters had a gender bias when they selected candidates, it is possible that the recommendation algorithm carries the same bias.

For instance, Amazon stopped using an AI recruiting tool after it realised it was consistently downgrading female candidates. Their machine learning technology was biased against women.

How can recruitment processes avoid this bias?

The first rule is for data scientists to never use personal data in an algorithm – algorithms must always be blind to information related to gender, age, political orientation, religion, or disabilities. Otherwise you run the risk of developing a biased algorithm which could discriminate candidates based on personal information.

The second rule is to collect high volumes of data. If your data set is too small, the more likely you are to be biased. The more data you collect, the more you reduce the risk of bias and ensure diversity of profiles.

Algorithms must always be blind to information related to gender, age, political orientation, religion, or disabilities

The third rule is to always explain the reasons why an algorithm is recommending A or B. Sometimes algorithms are so complex that they can be like a black box. If you have a black box that recommends you hire one person rather than another – yet doesn’t know why – then the recruiter will have to trust the algorithm blindly. However, if it is clear which CV requirements are considered to make the recommendation, the recruiter will be able to apply his or her own judgement when making a final decision.

And last but not least, it is crucial to make sure that the team working on machine learning is as diverse as possible. If you only have a team of 28-year old men with similar educations, then it’s not likely they will make bad decisions on purpose – but they will all have very similar viewpoints.

We humans are all biased...

That is why it is so important to have gender and age diversity in tech teams. For instance, when the Apple Watch came out back in 2014 it didn’t consider the female period cycle – even though it is a critical aspect of women’s health. The cycle tracker feature was finally released in September 2019, five years later. There are suggestions that perhaps there were not enough women in the product development team!

This lack of gender balance worries me because artificial intelligence is going to revolutionise our way of life: if this new world is to be reinvented by only half of the population then it will not be as inclusive as if it were created for everyone in an equitable way.

The female gender gap often gets the most attention, but men must also break their own glass ceilings – and it’s just as hard. Bronnie Ware, a palliative care nurse, wrote a book in which she commented that most male patients – before dying – regretted not having spent enough time with their children.

The book made me wonder: who suffers more discrimination in the workplace, women for missing out some career opportunities, or men for missing out on their family life? I believe men are not always aware of the invisible social pressure that doesn’t always let them consciously choose what they really want in life. In Spain, only 5% of workers who have asked for reduced working hours to take care of their children are men. They are called "unicorn fathers."

As a manager, each time a man on my team is expecting a baby I am always asking if he has considered coming back with reduced working hours after his paternity leave. Just to make clear that this is an option he can consider if he wishes.