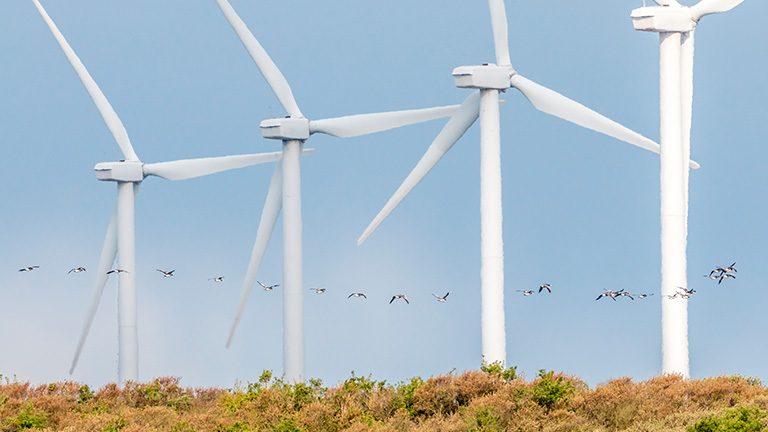 Towards a just energy transition, in ecological terms too

The main concern in Europe today, apart from the stagnation or aggravation of the war in Ukraine, seems to be how to get through the winter energy-wise. The accelerated process of global warming in which we are immersed – summer is coming – does not spare us from having to endure harsh winters on the European continent in the meantime.

The energy crisis and global warming have brought us to the abrupt realisation that our socioeconomic model is based on low energy prices, and if this fails, we may have to rewrite the future. The million-dollar question is now whether the necessary energy transition that is proposed as a solution for the deceleration of global warming also requires the rethinking of how we function as a society.

I think it does; I think it is necessary. We know that, ecologically speaking, life on this planet uses an external source, the sun, for which no price is paid, but the value of which is unnegotiable insofar as it is the basic support of a huge variety of life forms, including our own. Socially speaking, can we build something similar?

Compensation for damages and losses

About a year ago, after COP26 in Glasgow, Scotland, I said in Do Better that we could see the glass as being half full (optimism) or half empty (realism). After COP27 in Sharm El Sheikh, Egypt, I would say that we are closer to the latter vision.

We continue to be incapable of setting a cut-off date for the consumption of fossil fuels. We tried to set one for peak emissions – 2025 – but did not quite manage it. The only thing that can be regarded as a success at COP27 is the ambiguous recognition that the rich countries should pay the poor countries for the losses and damages caused by our present model of production and consumption, together with the clarification of certain funding issues.

The small step taken concerning losses and damages presents itself as a problem of ethics and fairness or solidarity. In this respect, the first developments began to unfold almost a decade ago at COP19 in Warsaw. This problem goes beyond the real capacity of certain countries to adapt to the consequences of global warming.

Is this problem complicated to understand? Not in the slightest. Is it complicated to put the solutions into practice? Very, since in order to do so it is necessary to tackle multiple questions: How much has been lost in terms of lives and infrastructures? In what way is it due to climate change? How can reconstruction be done? How should funding be mobilised? Undoubtedly, talks will continue about the mechanism for making it work next year at COP28, this time in the Arab Emirates.

At the United Nations Framework Convention on Climate Change at Sharm El Sheikh there has been talk – a great deal of talk – about fairness and adaptation, but less about mitigation; how to take on responsibility for the most disadvantaged, those who suffer most and those who are going to suffer most, how to ensure that important agreements in this respect are put into practice.

The conference encourages us to talk about geoethics: appropriate values, practices and behaviour in human beings' interaction with the planet

It is not easy to educate and get this message across to a society in which, unless you are in the group of the disadvantaged (of which there are plenty, to be sure), your only worry seems to be whether your kids will be able to use their PlayStation in the afternoon, but it is absolutely necessary.

Less than a month has passed since COP27 concluded, and last week saw the opening of COP15 on biological diversity in Montreal, Canada. If communication was difficult in the first case, in the second it is almost non-existent.

Scientific technicalities aside, this convention also brings us to talk about ethics, in this case geoethics: appropriate values, practices and behaviour in human beings' interaction with the planet on which they live.

At Montreal the aim is to reach – we need it desperately – a global agreement for the protection of biodiversity. Thirty percent of the terrestrial and marine surface should be protected by 2030. Summer is coming, for all the species that inhabit planet Earth, and we must lighten the burden exerted on the rest from the human pressure they undergo so that they can survive. None of this is banal for humankind, as we are absolutely dependent on the biodiversity around us.

Renewable energies like wind are also used by many other organisms

The two UN conventions walk side by side, closer than ever. Both have committed to ensuring that the solutions to global warming do not jeopardise the functioning of biodiversity. The energy transition must be just, both socially and ecologically.

We have the policies and we must apply them correctly. Global warming leads us to change the energy sources we use, also to manage them better, and above all to learn how to save energy. But it should also lead us to think how it affects the functioning of natural systems.

We must understand too that this renewable energy is also used by many other organisms; wind currents are also used by birds, wind is also an essential factor in the mixing of nutrients and ocean productivity... We are not the only ones who use these resources. We still have a lot to learn.

Carbon-neutral, nature-positive, in an equitable world

Twenty-seven climate change conventions (UNFCCC) and fifteen biodiversity conventions (UNCBD) make a total of 42 global events talking about how to protect climate and biodiversity. We have advanced, yes, but not enough. However, all these conventions have made two basic obligations clear.

First, to keep the global average temperature increase below 2°C over pre-industrial levels and make efforts to limit that rise in temperature to 1.5°C over those levels. And second, to protect 30% of the surface of the planet in order to conserve its biodiversity, terrestrial and marine alike, and ensure that climate solutions do not degrade biodiversity.

To these two issues – carbon-neutral, nature-positive – we need to add the main conclusion drawn at Sharm El Sheikh: we have to make the world a much more equitable and supportive place.